Card Of The Week July 23

Japhet Amador of the Eagles has been having a good weekend.  Yesterday the big fellow became the first Eagle ever to hit home runs in three consecutive at bats:

Then in today's game, Amador lead off in the bottom of the ninth in a tied game and proceeded to untie it:

I was surprised to discover that Amador did not have a card in BBM's 1st Version set this year (obviously I missed this fact when I was looking at who was missing from the set a few weeks back).   His only cards so far this year are in BBM's Eagles team set (which I don't have yet) and a team-issued Eagles set.   I expect that he'll show up in BBM's 2nd Version set next month.

Here's a card of him from the "Newcomer" subset from last year's BBM Eagles team set (#E74): 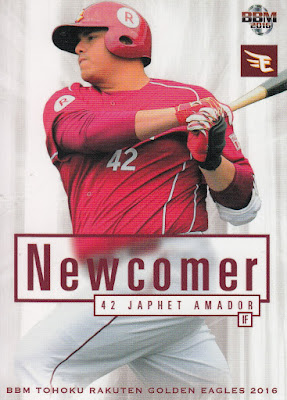