Georgia On My Mind

Back in 2010, BBM did some cards as a tie-in with Georgia Coffee, a coffee drink made by Coca-Cola in Japan that is sold in cans.  You would get two cards with each can you bought.  The cards were smaller than the standard card size.  Gen from YakyuBaka (which of course is now YakyuDB) did a post about the cards he got.  Apparently there were 60 possible cards which were issued in pairs - so for example the two cards that Gen got - Shohei Tateyama and Toshiya Sugiuchi - are always paired up together.  All 60 cards are for active players.

I never got any of these Georgia Coffee cards but I did get a couple cards from another set that they did.  Apparently they also did a "Legend" set containing all OB players.  I did a post on the pack that I had gotten back in 2010.  I picked up a couple more the other day in a lot of Japanese cards that I got on Ebay which made me look into these cards again.  The two new cards I got were for Yutaka Takagi and Kazuyoshi Tatsunami:


The design of the cards is the same as the 2009 BBM Legends set, a set which I believe was distributed in a series of magazines (possibly Shukan Baseball).  I started wondering if BBM had done a miniature version of the Legends set for the Georgia Coffee cards but a little research quickly disabused me of this notion - first Takagi doesn't appear in the Legends set and second the cards in the Legend set use different photos:

I really don't know much else about these cards.  There were at least 12 of them and I think that like the cards for the active players they were issued in set two card pairs since the pack I got in 2010 that contained Sadaharu Oh and Masayuki Kakefu also contained this little flyer: 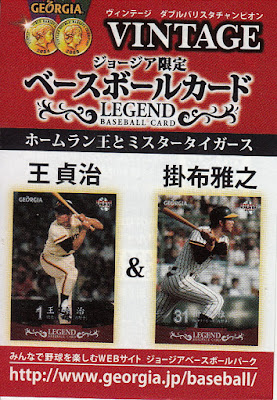 I wonder if the pack that the Takagi and Tatsunami cards came out of had a little flyer with those two cards on it.
Posted by NPB Card Guy at 10:08 PM