Card Of The Week July 9

Friday night the Carp were down 8-3 going into the ninth inning against the Swallows at Jingu Stadium but it didn't stay that way for long.  Pinch hitter Xavier Batista lead off the inning with a home run, his sixth of the season (of those I think at least three of them were pinch hit homers).  After Kosuke Tanaka grounded out Ryosuke Kikuchi homered to make the score 8-3.  Yoshihiro Maru followed with a walk and scored two batters later when Ryuhei Matsuyama doubled.  Pinch hitter Ryoma Nishikawa then singled to put two on for pinch hitter Takahiro Arai.  Arai then launched a three run home run to put the Carp up 9-8 which was the final score.

To some degree lightning struck again today - the Swallows were up 3-2 going into the ninth but Arai came up as a pinch hitter again and this time hit a double to tie the game up.  Both ninth inning rallies were at the expense of Yasuhiro Ogawa whom it looks like the Swallows had been considering turning into a closer.  The ending was a little better for the Swallows - the game remained 303 after 12 innings and so goes into the books as a tie.

BBM's 2015 Carp team set had a two card subset called "Big Comeback" to commemorate Arai and Hiroki Kuroda returning to Hiroshima after having spent time with other teams.  It seems appropriate to share the Arai card (#C72) this week: 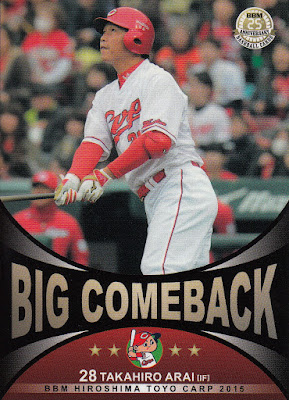