Sometimes there's an odd path to discovering something. I was up early on Monday of this week and tuned into the Lions/Fighters game in time to see the first pitch ceremony (well actually it was a first pitch ceremony - they'd had a Star Wars themed one that I tuned in too late to see).  The ceremony featured Isao Harimoto in the same throwback Toei Flyers uniform that the Fighters were wearing for the game and another gentleman in a Hanshin Tigers uniform that I didn't immediately recognize.  For some reason I was thinking it was Masaaki Koyama but I wasn't really sure.  Then Pacific League TV sent out this tweet: 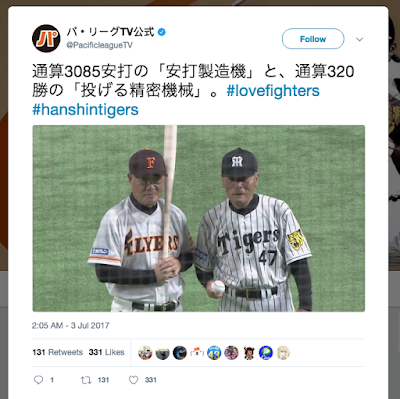 So OK, that's a clue.  I know Harimoto had 3085 hits but off hand I didn't know how many wins Koyama had.  So I did a quick search for Koyama on Baseball-Reference and did a double-take: 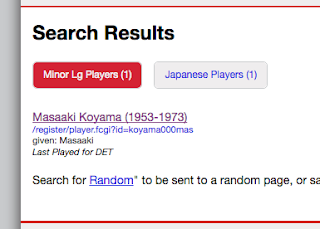 Clicking on Koyama's page revealed (in addition to confirming that Koyama had 320 wins) that Koyama had pitched 3 innings in one game for the Detroit Tigers Florida Instructional League team in the fall of 1967.  A little more research revealed that there were three other Japanese players on that team as well.

Now I had known that there were Japanese players with a couple of the Giants Arizona Instructional League teams in the 1960's but I hadn't realized that there were other teams who hosted NPB players as well.  So I started going through all the teams that Baseball-Reference had data for in both Florida and Arizona and came up with a few more.  The Washington Senators hosted three Chunichi Dragons in the fall of 1965 with their Florida team.  In 1966 there were three teams with NPB players - the Dodgers in Arizona had three players from the Yomiuri Giants while in Florida the White Sox had two players from the Sankei Atoms and the Tigers had two players from Chunichi.  The Tigers hosted four players (including Koyama) from the Tokyo Orions in 1967 and four players from two different teams (the Orions and the Nishitetsu Lions) in 1968.

Here's a table with all the players

As you would probably guess there are no known baseball cards of any of these guys while they were with their respective Instructional League team.  Most of them have had baseball cards in Japan - I have cards of 12 of them:

As far as I can tell Ikebe is the only one of the other six players who ever had a baseball card.  He has two cards in the 1974/75 Calbee set.
Posted by NPB Card Guy at 10:18 PM