Ryan did a post a few months back talking about the 1991 BBM team logo holograms and I thought it might be good to do a post on the holograms that BBM did in their first four years doing cards - 1991 to 1994.

BBM was not the first card manufacturer to do holograms.  Calbee did a six card hologram set in 1989 that's extremely rare.

Like Ryan mentioned, the 1991 BBM set included team logo holograms.  These were the only insert cards and were quite rare - according to Engel they were distributed at a rate of one every two boxes.  Each box had 30 packs containing 10 cards each so that's 1 logo per 60 packs.  All 12 cards were assigned number 240 - the base cards were numbered 1-239 and 241-399.  The latest Sports Card Magazine (SCM) that had a price guide for BBM cards (SCM #116) has a value of 2000 yen for each card. 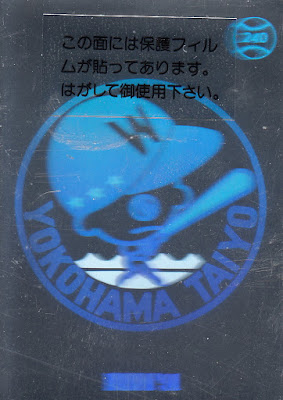 The 1992 BBM set featured player holograms.  There were 12 in total - one for each team (as you probably guessed).  BBM issued the 1992 set in two separate series of 259 cards and there were six holograms inserted into cards of each series.  Series One had holograms of Takahiro Ikeyama, Masumi Kuwata, Hideo Nomo, R. J. Reynolds, Kazuhiro Satoh and Hiroshi Yagi while Series Two had Koji Akiyama, Mitsuchika Hirai, Katsuyoshi Murata, Yukihiro Nishizaki, Hiromitsu Ochiai and Shinji Sasaoka.  The cards are all unnumbered but officially the Series One holograms are all card number 250 and the Series Two holograms are all card number 500.  SCM has values for the cards starting at 1500 yen and going up to 3000 yen for Nomo, Akiyama and Ochiai. 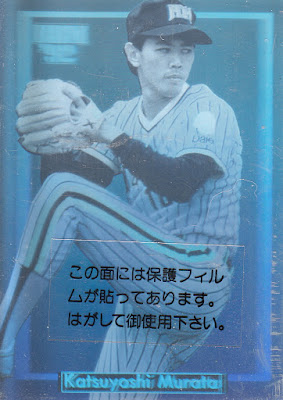 For 1993 BBM returned to the team logo holograms.  This time they were not only inserted randomly in packs but all 12 were included in the factory set (the last time BBM issued a factory set for their flagship set).  Despite the fact that the set was not issued in two series this time there were still two numbers were set aside in the checklist for the holograms - numbers 237 and 500.  Again the holograms are unnumbered but according to SCM the six Pacific League team logos are assigned to #237 while the six Central League logos are #500.  SCM has the value of each card at 500 yen. 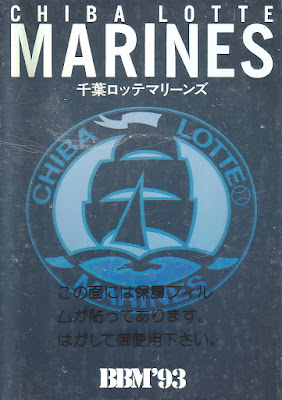 1994 saw BBM go back to doing player holograms.  This time there was a bit of twist on them - they had the player's home stadium in the background.  Oddly enough the stadium photo was oriented horizontally while the player's photo was oriented vertically.  Once again the holograms were unnumbered but this time there was no number or numbers put aside in the checklist to account for them.  The 12 players (one from each team of course) were Akira Etoh, Atsuya Furuta, Mel Hall, Shinji Imanaka, Kazuhiro Kiyohara, Hideki Matsui, Koji Nodo, Hideo Nomo, Hiroki Nomura, Tsuyoshi Shinjyo, Matt Winters and Koichiro Yoshinaga.  SCM has values starting at 2000 yen for these cards and going to 9000 yen for Matsui and Nomo. 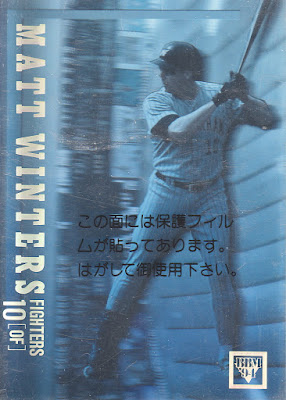 I will point out that the cards look better in person than they do in the scans.  You'll notice that there's text on the front of each card.  I'm not sure what this says but it's on a small decal for the 1991 and 1992 cards.  For the 1993 and 1994 cards I think the text is on a clear "shield" covering the entire card.

The text on the front basically says that it's a protective film, and you should peel it off. It's very similar in language to the protectors on Finest and the Donruss cards that had them too. (I don't think UD used any kind of film on their hologram cards.)

@Ryan - I figured it was something like that. I wonder if anyone ever peels them off? I think all the ones I have still have the stickers

I was fortunate to get a complete set of the 1991 holograms at the 2014 National Sports Card Convention in Cleveland for $200 to complete my set however I later found that I need the All-Star Set to complete it.