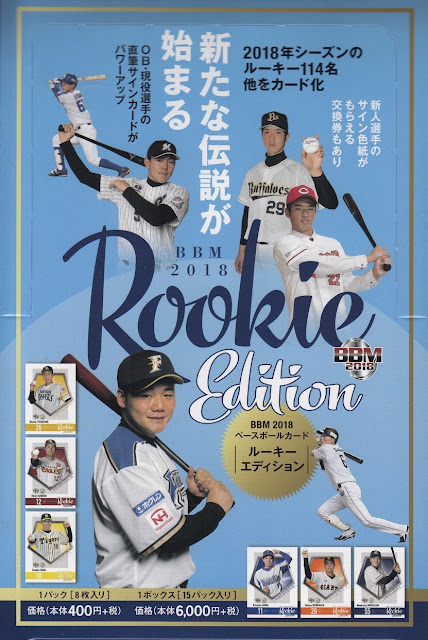 Rookie Edition, BBM's annual draft pick set, was released a few weeks back.  It contains 126 cards, 114 of which are the players who were taken in last October's NPB draft.  As always, the photos of the players were taken at the press conferences that each team has over the winter to introduce the players to the fans and as always the photos are remarkably monotonous.  The big names in the set (so far anyway) are Kotaro Kiyomiya of the Fighters and Shosei Nakamura of the Carp.  The players are framed in a pentagon this year which continues the sequence of geometric figures started with circles in the 2016 edition and triangles in the 2017 edition.


I need to point out that this set includes the players taken in both the regular draft and the ikusei draft - the ikusei players will probably not show up in any other sets this year.

I didn't realize this until the set came out but BBM did "secret" versions of all 12 1st round draft pick cards.  Unlike the "secret" versions of the cards in last year's 1st and 2nd Version and Fusion sets which featured more interesting pictures than the original cards, these "secret" versions just show a different boring posed photo than the original card.  I decided to pass on them, especially when I saw the prices that Jambalaya is charging for them - 2500 yen for the Kiyomiya card alone which is almost what I paid for the entire regular set.

The remaining 12 cards in the set is the "Early Days" subset.  This subset features one OB player from each franchise (Kintetsu is represented instead of Rakuten).  The photo for each player are apparently from their rookie season - the photo of Atsunori Inaba looks like it's from the Swallows' rookie player press conference in the winter of 1994-95.  I've no idea why any of these players were included in this subset - my bet is simply to provide OB players to have autographs in the set.

I complain about this set every year and yet I still buy it - this is the one set that's really driven by the players.  The problem is - you don't know who the interesting players are going to be for a couple years.  As I keep saying, this set would be a lot better if BBM showed the players in their college/high school/industrial league/independent minor league team uniform rather their new NPB team's.  Here's some place where Epoch could really give BBM a run for their money.

Ryan did a post on this set a few weeks back where he gets into the parallels, inserts and autograph cards.  And as always you can see all the cards (including the "secret" versions and the inserts) at Jambalaya.
Posted by NPB Card Guy at 5:57 PM

That Kiyomiya is nice. I'll definitely pick on up when I go to Japan again.