Card Of The Week March 11

After 9 seasons in the majors pitcher Koji Uehara is heading back to NPB.  He's returning to the Yomiuri Giants, the team he left following the 2008 season and the team that had drafted him out of the Osaka University of Physical Education in the first round of the draft twenty years ago this fall.  He'll be assigned uniform number 11 as his old number 19 is in use by Tomoyuki Sugano.

Here's a card of Uehara from his rookie season of 1999.  This card is a signature parallel of his card from Calbee's All Star subset that year (#252): 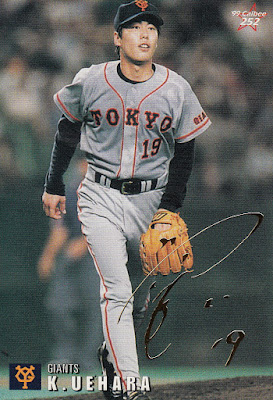 Calbee issued complete gold signature parallel versions of their cards in 1999 and 2000.  I believe that hese sets were available as a mail-in redemption of one or more "lucky" cards randomly inserted into packs.  I got a near complete 1999 Series Four parallel that included this card at a store in Tokyo when I was there five years ago this week.
Posted by NPB Card Guy at 8:53 PM