A while back I did a post on the six NPB sets that Ed Broder did in the mid 1970's.  Jason had asked a question in a comment about a couple players who were not completely identified in Engel's checklists for the sets.  Both the JA5 and JA6 sets list a player named "Takahashi".  Unfortunately it's not clear which of about five or six players with that family name active at the time the cards are for.  Engel does not indicate which team "Takahashi" was playing for.  Luckily there was someone selling the cards on Ebay recently and I was able to see the cards and figure out who "Takahashi" was.

The JA5 Takahashi is Kazumi Takahashi of the Giants.  This is a pretty easy id as Kazumi wore #21 and we can see the number on his uniform. 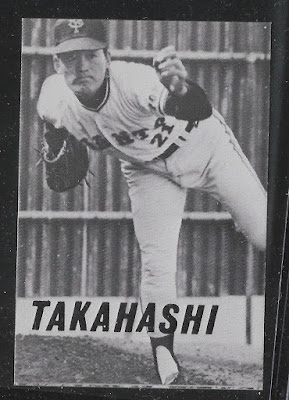 The JA6 Takahashi is a little harder.  There were three Takahashi's with the Fighters that season - Hiroshi, Naoki and Kazumi (who had been traded to Nippon Ham by the Giants for Isao Harimoto in the 1975-76 off-season).  However Naoki and Kazumi were pitchers so I'm pretty confident that this Takahashi is Hiroshi (who was one of the two other players that Nankai sent to the US in 1964 to play in the San Francisco organization along with Masanori Murakami). 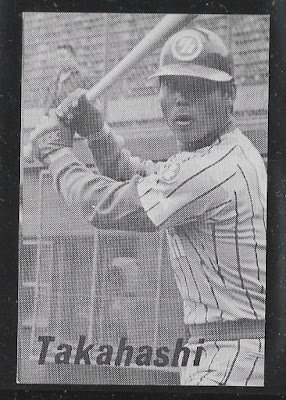 I want to point out that I didn't buy either of these cards so I need to thank the Ebay seller (who of course I didn't take note of) for posting the images.
Posted by NPB Card Guy at 10:27 AM