Daewoo Media issued their first set under their SCC moniker for the Korean Baseball Organization this year back in June.  Dan Skrezyna picked up a set for me a while back but I hadn't had a chance to write about until now.

There are four different flavors of base set cards - "normal" (9 per team), "rare" (5 per team), "holo" (3 per team) and "signature" (2 per team).  The "rare" cards have a shimmering finish (that actually comes through on the scans) while the "holo" cards have a silvery finish.  The "signature" cards feature a facsimile signature done in "holographic ink".

I will defer from commenting how good the player selection is as I don't really know the KBO all that well.  There are (as usual) no foreign players in the set but pretty much every Korean player I know of off hand - Lee Dae-Ho, Park Byung-Ho, Kim Hyun-Soo, Hwang Jae-Gyun, Choi Jeong, Han Dong-Min, Son Ah-Seop, Lee Bum-Ho and Kim Tae-Kyun - are all in the set.


Like the SCC sets from last year, the backs of all the cards are identical: 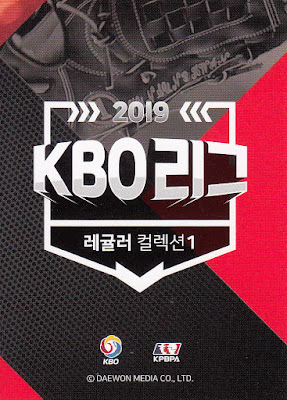 Also like the SCC sets from last year, this is an attractive set.  Dan has added the checklist for the set over at TradingCardDB.com and has added images for all the base set cards.