Back in November, BBM released a 99 card set to commemorate the 40th anniversary of Lotte buying the Orions (now Marines) in 1969. This was one of the sets I got in the mail last week.

As I said in my earlier post when the set got announced, the set looks quite a bit like the other three anniversary sets BBM put out last year (the Lions, the Hawks and the Baystars). There are a six card "history" subset, showing pictures from various significant events in Lotte's tenure and the year-by-year results for the team on the back. There are 74 cards for OB players and 19 cards for the current (2008) team. (These counts are different from the original listing on the website.)

As was the case with the other sets, the OB players include a combination of retired players (Michio Arito, Isao Harimoto, Leron Lee, Leon Lee, Tomohiro Kuroki, Koji Yamamoto (the other one), Shinichi Etoh, Julio Franco, Hiromitsu Ochiai), managers (Kazuhisa Inao, Kazuhiro Yamauchi) and ex-Lotte players playing elsewhere both in NPB (Seung-Yeop Lee) and MLB (Masahide Kobayashi, Yasuhiko Yabuta). I don't know Lotte's history real well, so the only people that are obviously missing to me are Masaichi Kaneda, who managed them in the mid-1970's (including the 1974 Nippon Series Champions) and (as was the case with the Hawks and Lions) Katsuya Nomura. Nomura only played with the Orions for a single season (1978), but there are players who do appear in the set that only played for Lotte for two years (Harimoto and Franco).

For the most part, I think it's a pretty nice set. My only real complaint is that there are more black-and-white photos in the set than I would expect, given that all the pictures are since 1969. I do like the fact that most of the 2008 players are shown wearing "Turn-Back-The-Clock" Orions uniforms. 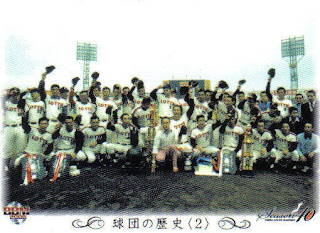 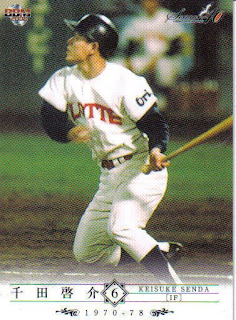 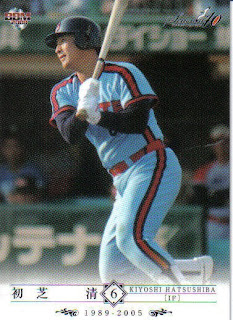 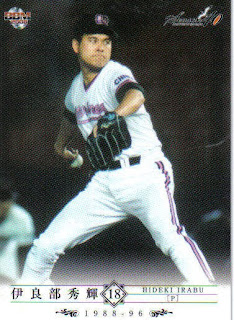 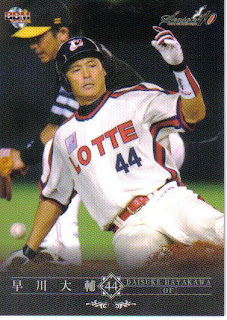 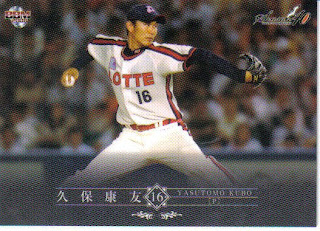 I recently came accross your blog and have been reading along. I thought I would leave my first comment. I dont know what to say except that I have enjoyed reading. Nice blog. I will keep visiting this blog very often.

Thanks for the kind words.