I got a bunch of cards in the mail today from Japan, so I'll be trying to do a bunch of posts on some recent sets in the next week or so. First up is the BBM Tokyo Big 6 Autumn Version set. As I mentioned before, this is a 36 card (plus 1 insert card) boxed set that came out last September. The cards are evenly divided among the six university teams with each team having five player cards plus a team card. (I can't comment on the insert card because I bought an opened set that didn't include it.) About half the players in the set were also in the larger Tokyo Big 6 set that came out last spring (referred to as the "Spring Version" of course). Like the earlier set, this set is very good looking, with a simple card design and a lot of nice photography.

As I did with the Spring Version, I went and checked to see who in the set was drafted in the NPB draft back in October. As Deanna said in the comment to that post, the same five players that appeared in the earlier set who were drafted also appear in this one. They are:

That actually was all the Tokyo Big 6 players taken in the draft. (I don't know if it is just a coincidence that they were only drafted by Central League teams.)

Anyway, since I know almost nothing about college baseball in Japan, I was surprised that I actually recognized one of the players - Yuki Saitoh, the "Handkerchief Prince". Here's his card and a couple of others: 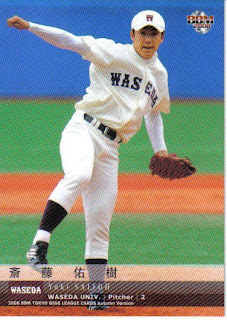 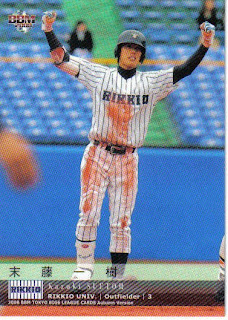 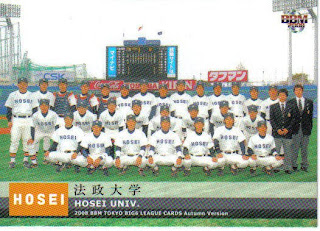 From the top, that's Yuki Saitoh (#08), Kazuki Suetoh (#22), and the Hosei University team card (#30). All the team pictures were posed in front of the new scoreboard at Jingu Stadium.
Posted by NPB Card Guy at 8:43 PM