Card Of The Week January 25

Former Hawk, White Sox, Padres and Phillie Tadahito Iguchi is returning to Japan to play for the Marines. I read that they've given him uniform #6, which was Hiromitsu Ochiai's old number. No pressure or anything. 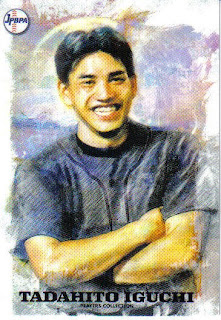 The 2003 JPBPA set was a 60 card set produced by the Japanese Professional Baseball Players Association (the Japanese player's union). Each card featured a drawing of the player. It doesn't look the set was licensed by NPB, so there are no team logos or even names (there are some card issues in the US that are licensed by the player's association, but not MLB, so the team logos on the uniforms are airbrushed off). Instead of a pack, the cards came in a little box that included a little player pin. It was an odd little set that was only issued the one time.
Posted by NPB Card Guy at 11:46 AM

I've been reading your blog for some time and love checking in on the new sets. I had been planning for some time a blog all about Noboru Aota, and, since his election, have finally gotten it into shape:

Please take a look, and keep up the great work (that Hiroshima set looks amazing).

Thanks. Your blog is great. I don't know a lot about early Japanese baseball so it's great to see some information. (And I was wondering who took the career home run record away from Aota.) The cards are cool too.

And, yeah, the Hiromshima set is pretty cool. I think it captures the history of the team a little better than some of the other BBM Anniversary sets.