With the retirement of Kazuhiro Kiyohara, Karl "Tuffy" Rhodes is now the active leader in home runs in the NBP with a total of 442. Rhodes joined the Kintetsu Buffaloes in 1996 and moved to the Giants in 2004. He sat out the 2006 season (after going to spring training with the Cincinnati Reds), then returned to Japan in 2007 with the Orix Buffaloes. He is only the second foreign player to play long enough in Japan to no longer be considered a gaijin, at least for roster purposes (I think the first was Leron Lee, but I'm not sure).

I'm going to include a couple scans here, but Jason's really got this covered. Here's a couple of cards on his wantlist (which sadly I can't help him with): 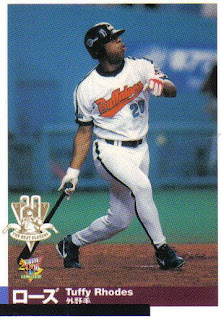 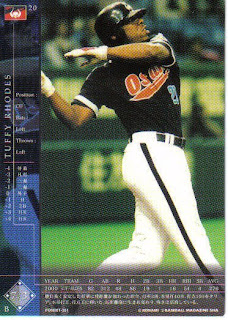 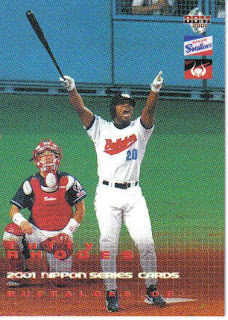 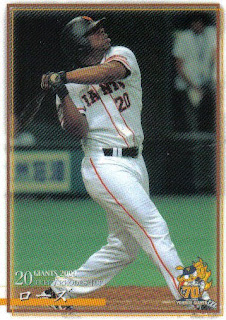 I have to wonder, would he qualify to play for Japan in the World Baseball Classic? For that matter, I think it's a crime he wasn't invited to play for the US team. There's nothing saying the team has to be populated by players from MLB or MiLB. Seems Tuffy deserves at least one last chance to play for his country, what with all the MLB players that have passed on the WBC.

There's nothing saying the team has to be populated by players from MLB or MiLB.

Yeah, but there's no way MLB's going to allow a non-MLB player to play for Team USA. And I doubt Alex Cabrera was invited to join the Venezuelan team either. (Although it looks like Dicky Gonzalez and Val Pascucci played for Puerto Rico and Italy in 2006 despite being on NBP rosters.)

As an update, with his 3rd roundtripper of the 2009 season on 11 April, Tuffy is now in sole possession of 12th place all time, passing Shigeo Nagashima.

I have dozens of autographed Tuffy cards from the Astros and Cubs years. I also have a Kintetsu Buffaloes jersey that Tuffy wore in 99 season.
Tuffy rocks.