Following the 1961 season, the Taiyo Whales (who had been the defending Nippon Series champions, having won it all in 1960) played an exhibition series against the Pacific Coast League's Hawaii Islanders.  A small set of three cards were issued by the Union Oil company, who had issued cards for various teams in the PCL off and on from 1958 to 1961.  The three cards were player cards for Akihito Kondo and Gentaro Shimada and a Whales team picture.  The player cards were 3 inches by 4 inches in size, which was the standard size for the other PCL cards issued by Union Oil that year.  At 3 3/4 inches by 5 inches, the team card was a little larger: 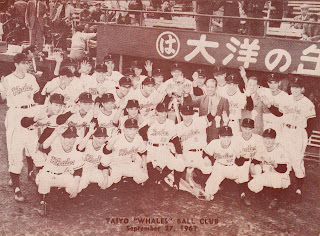 Very cool set. I used to see them offered now and then for about $150(1990s), but rarely see even singles these days.