I've learned about some other Korean cards beyond the 1993 and 1994 Teleca cards that I got scans from Robert Shadlow.  Here's a quick list:

- Ralph Pearce sent me a scans of a sheet of 1983 "takji" cards - basically round menko (or pogs).  Here's the scans showing both the  front and the back of the sheet: 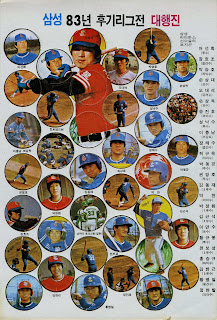 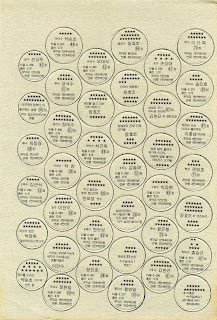 It's a good thing the cards are still in the sheets - some of the cards only show a player's legs, belt buckle or upper arm - they only make sense in the full sheet.

It looks like the cards are all of the Samsung Lions except for what I think is a card of Nankai Hawk player Yuji Kubodera.  Neither Ralph or I have any idea why Kubodera has a card on the sheet, unless he was maybe of Korean descent but born in Japan (like Masaichi Kaneda and Isao Haritmoto).

- Teleca did some phone cards in 1991.  Robert sent me scans of those as well: 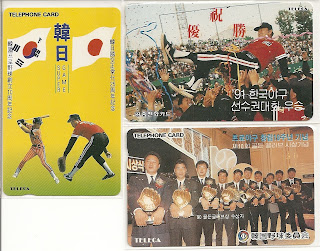 A couple of these showed up on the sleeve for the Haitai Tigers Teleca cards in 1993.

- I picked up a couple of what appear to be Teleca cards from 1992 from eBay recently.  They have the same number icons on their fronts as the 1993 Teleca cards have on their backs.  I have no idea if they were sold in sleeves or not - the cards I got didn't have sleeves with them.  Here are scans of the fronts and the backs of them:


- In addition to their other 1994 cards, Teleca produced at least one phone cards that year.  Robert also scanned that one for me as well: 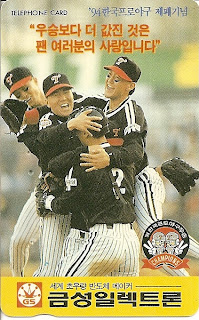 It looks like this is to commemorate the Twins winning the KBO that year.

- Finally, Robert also sent me scans for a group of six phone cards for the LG Twins that Teleca produced in 1997.  It looks like the cards came in two sleeves that held three cards each.  The sleeves were tucked into an envelope.  Here are some scans:

I have no idea who any of the players are.

My thanks to Robert and Ralph for providing me with the scans.
Posted by NPB Card Guy at 2:08 PM