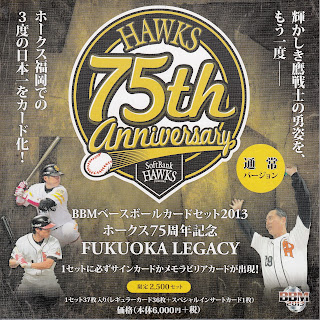 The Hawks celebrated their 75th Anniversary this past season.  BBM put out a set in commemoration last summer.  The 2013 season was also the 25th season that the Hawks played in Fukuoka, having moved there from Osaka following the 1988 season.  BBM put out a box set in September to highlight the Fukuoka years.  Actually what is specifically being highlighted here are the Hawks three Nippon Series championships in Kyushu - 1999, 2003 and 2011.

The set contains 37 cards - 36 "regular" cards and a "special" card.  As usual, I got an opened box so I don't have a "special" card.  The regular cards are split evenly between the three Series champions, so there are 12 cards for each team.  The 12 cards break down to the Best 9 plus DH for each team, an award winner for each team (Series MVP Koji Akiyama for the 1999 team, Sawamura Award winner Kazumi Saitoh for the 2003 team and Pacific League MVP Seiichi Uchikawa for the the 2011 team) and each team's manager.  As you might expect, there's multiple cards of several players - Koji Akiyama and Nobuhiko Matsunaka have three cards each and Sadaharu Oh, Hiroki Kokubo, Kenji Johjima and Tadahito Iguchi (among others) have two.

I was surprised that neither card of Kokubo had the usual shot of him throwing his bat on his follow through.

It's not a bad little set although it's probably not of much interest to anyone outside of Hawks fans.

UPDATE:  I neglected to mention that all the cards can be seen at Jambalaya.
Posted by NPB Card Guy at 4:06 PM