A month ago I did a post about a box break for a box of the new BBM Genesis set.  The box break was done by a reader named Pete who took a bunch of pictures for me.  I got a message from Pete earlier this week - he had bought another box of Genesis and was willing to again share information about what he got.

Each box of Genesis contains 20 five card packs for a total of 100 cards in the box.  Pete did almost as well on unique cards on the second box as he did on the first - 97 unique cards with only three doubles.

Here's some pictures that Pete was gracious enough to send:

He also passes on that he bought the box from Rakuten Global Market again for the same price ($95.97) as the first box.  He bought a couple other boxes for other sets (which I'll be doing a post about shortly) so the shipping charge was higher for the EMS shipping than it had been for the first box.

In addition to the two boxes, Pete had also picked up a couple Masahiro Tanaka memorabilia cards from Genesis off of Ebay and sent pictures of them along as well: 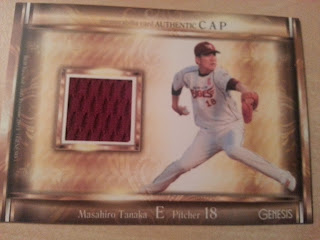 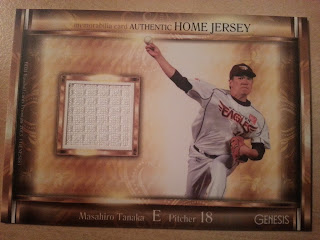 Thanks again Pete for passing along the information and the pictures.
Posted by NPB Card Guy at 3:31 PM