Card Of The Week November 10

Samurai Japan swept the three game "Baseball Challenge" against Taiwan this weekend, making Hiroki Kokubo's initial outing as the national team manager a success.  I thought Kokubo's "Swing For The Win" insert card (#SW11) from the 2006 BBM 2nd Version set would be appropriate. 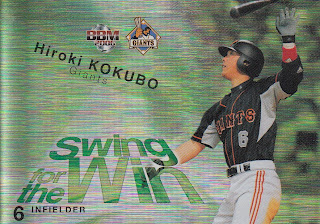 Hmm, even his insert cards use that ubiquitous pose.

One other note about Samurai Japan - a Jim Allen tweet this week brought my attention to the fact that Samurai Japan has an awesome English language web site with rosters for the national teams at all levels, including the women's national team.  There's also a link to Samurai Japan's online store, which is in Japanese and I have no idea if they ship overseas.
Posted by NPB Card Guy at 9:44 AM