Pete is a fan of both Kenta Maeda and Masahiro Tanaka so he picked up one box of each of their respective sets from Niki via Rakuten Global Market.  He paid roughly $51 for the Tanaka box and $33 for the Maeda box (on sale).  He also paid $24 for the EMS shipping for these two boxes plus his second Genesis box.

We'll start with the Tanaka set since it came out first.  The set contains 90 base set cards along with 18 "special" cards and 9 "insert" cards.  The 18 "special" cards are all foil signature cards - looks like there's two nine card subsets with a distinct design each.  The 9 "insert" cards commemorate his winning the 2011 Sawamura Award.  In addition, there are various photo, autograph, patch and jersey cards available - the possibilities are shown on the back of the box:


The box contains ten packs of seven cards.  Each pack contains one of either the "special" or "insert" cards along with six of the base cards.  I'm not positive but I think if you get one of the memorabilia cards in a pack, it replaces one of the base cards in the pack.  So the box will contain 70 cards - 60 base cards (or possibly a memorabilia card) and 10 "special" or "insert" cards.

On the plus side, Pete got no doubles in his box - he got 60 unique base set cards and 10 unique "special" or "insert" cards.  On the minus side, he didn't get any memorabilia cards.

Here's some pictures of the base cards:


Glancing through the scans at Jambalaya, it looks like some of the card fronts have pictures split across them.  Pete included some pictures of where the backs made up photos (although he doesn't necessarily have all the cards needed): 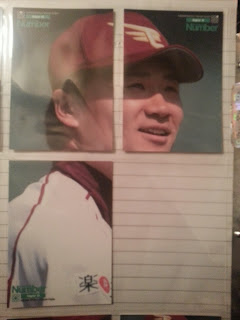 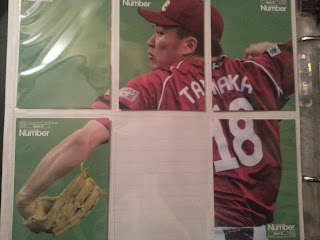 Here are the fronts and backs for the "special" and "insert" cards.  I wonder if the backs of the "special" cards form a sequence of some sort - it looks like there's some sort of graphic showing where the card is supposed to be in a nine card sheet.

The box also included a separate card under the packs called a "Privilege Card".  It looks like there are six possible varieties of this card including one that is "gold" and one that is "silver".  I don't know if these are some sort of metallic card or if it's a cardboard card with gold or silver on the front.  Pete didn't get one of those, he got card #03.  I don't know why one of them is numbered "D" instead of a number.

While Pete did not get a memorabilia card in this box, he did pick up a jersey card from the set off Ebay.  It's numbered 15 of 68: 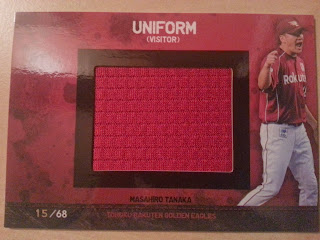 The Maeda set has 81 base cards to go with 18 "special" cards.  Like the Tanaka set, the 18 "special" cards are foil signature cards that are broken into two nine card subsets with a different design each.  There are a wide variety of memorabilia cards available - once again they are all shown on the bottom of the box:


The packs are the same as the Tanaka packs - the box contains 10 packs of seven cards.  Each pack contains a "special" card along with six base cards.  If there's a memorabilia card in the pack, it appears to take the place of one of the base cards.


Once again, Pete got no doubles in the box.  Even better, this time he pulled a memorabilia card - an undershirt card, numbered #56 of 82:


With the memorabilia card, Pete got 59 unique cards for the base set and 10 unique "special" cards.  Here's a number of pictures of the base cards.  As was the case with the Tanaka cards, there are card fronts that have pictures split across them and card backs that form pictures as well when put in 9 card sheets in order:


Here are two of the "special" cards showing the different designs:

Again just like the Tanaka box the Maeda box included a "privilege" card under the packs.  It looks like there's four possible cards, one of which is numbered with the letter "A" for some reason.  No gold or silver cards this time around though.  Pete got card #02:

Pete's box also included a "reservation" card.  Neither of us is sure what this is, but Pete thinks it was an exclusive card with Niki intended for people who had pre-ordered the box.  Pete isn't one of those people but he thinks Niki might have had extras.  I don't know if there are multiple versions of the reservation card or not, although there is a letter "D" on the card which may indicate there are at least cards A, B and C as well.  Since it's a Niki exlusive, Jambalaya doesn't have these listed.

Once again, my thanks to Pete for getting the boxes and sharing the pictures and information about them.
Posted by NPB Card Guy at 6:40 PM

These boxes are pretty cool. Now that Rakuten is having their shipping deal, I might have to try my hand at one of these.