Card Of The Week November 11

I've been going through the cards for the new (relatively anyway) BBM No-hitters set, getting ready for the post I'm going to do on it.  I've been figuring out which no-hitters do not have cards - there are eight regular season ones that are missing.  There's also a couple non-regular season ones that aren't in the set either.  One of them is the combined perfect game thrown by Daisuke Yamai and Hitoki Iwase of the Dragons against the Fighters to finish off the 2007 Nippon Series.  The other one is a little older and even more amazing.

On July 17, 1971, the Central League no-hit the Pacific League in the first of the three All Star games played that year.  Yutaka Enatsu of the Tigers started for the CL and pitched three innings.  He also hit a home run in the game.  He was followed in turn by Hidetaka Watanabe of the Giants (2 innings), Kazumi Takahashi, also of the Giants (1 inning), Hisanobu Mizutani of the Dragons (.1 innings) and Tadakatsu Kotani of the Whales (2.2 innings).  Enatsu picked up the win and was named MVP of the game.

The 2000 BBM Century's Best Nine set included an insert set entitled "The Scene".  The 10 cards in the set commemorated significant events in Japanese baseball.  The 1971 All Star game no-hitter was the first card (#S-01) in the set: 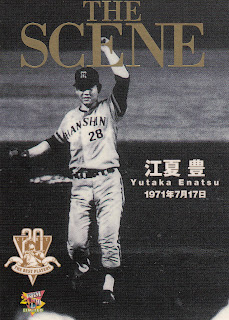 I got some of the information about this from the list of no-hitters in Baseball Reference's Bullpen.
Posted by NPB Card Guy at 9:24 PM

I'm sure you already know this, but as far as I understand, combined no-hitters don't count as official no-hitters in NPB.

I'm interested in finding out which eight no-hitters aren't in the set, and without putting any effort into it I wonder why they aren't in there (I think there are a few other combined no-hitters out there that I'm sure are on the list). I really need to pick up this set, actually. And now that you've mentioned the Century's Best insert card, I think I'm going to have to find one of those as well.

Actually I did not know that. That explains why three of those eight are not in the set (and also the All Star and Nippon Series no-hitters). I hope to do my post for the set later today and you can see the five that aren't included. I suspect that they simply couldn't get permission from the players to include those cards.