Hideki Matsui's nickname in Japan was Godzilla and he actually had a cameo in the movie Godzilla Against Mechagodzilla which was released in 2002.  I just discovered that this film was available on YouTube.

The sequence that he's in starts at 0:36:41 and only lasts for about 30 seconds.  It looks like he's doing a clinic with a bunch of kids at a ballpark near where Godzilla is coming ashore.  When he hears the evacuation commands, he calls the kids off the field.  One of the kids pitches a ball before running in, so Matsui swings and hits it a long way.  He and the kids watch the military fly in Mechagodzilla, then he herds the kids out to safety.

I grabbed a couple screen shots just for fun: 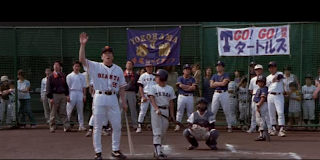 I'm guessing that that's not a home run that's going to show up in the Matsui home run cards.
Posted by NPB Card Guy at 10:01 PM


Thanks ... I knew we could count on you to provide some good posts on Hideki Matsui.

I'm not sure this one counts as a "good" post, but I'm glad you liked them.