For the 2002 season, BBM tried something different.  Instead of putting out one large 600+ card set, they would instead put out two smaller sets called 1st and 2nd Version.  The practice of stopping the printing midway through the season and replacing one or two teams cards for the purpose of updating their uniforms would end as well - the 2nd Version set could essentially function as a "Late Series" for the entire 1st Version set.

What BBM did was drop 10 players from each team (giving each team 30 players) so that there would be 120 cards fewer in the 1st Version set then there had been in the pre-Late Series sets from the previous couple year's sets.  The 2nd Series would also have 30 players per team but not necessarily the same 30 as the 1st Version set.

There was a second insert set for the 1st Version called Prime Time Players.  These 12 cards (one for each team) used the "lenticular" process to give them a 3D look.  (There was also a promo version of the set that did not use the "lenticular" effect)

BBM had gotten their first license to do cards of the Japan National Team for the 2001 Baseball World Cup.  They did a 47 card box set for the team over the 2001-02 winter and then included 16 cards for the team as a subset in the 1st Version set.  The players included in the set were Shinnosuke Abe, Yuya Andoh, Shugo Fujii, Akihiro Higashide, Hirokazu Ibata, Tadahito Iguchi, Taichiro Kamisaka, Kosuke Katoh, Ikuro Katsuragi, Susumu Nakanowatari, Hayato Nakamura, Tomoaki Satoh, Takayuki Shinohara, Yoshinobu Takahashi, Fumitoshi Takano and Hayato Terahara.

UPDATE:  Starting in 2002, BBM combined the poster and information sheet they had been including in the boxes into a single sheet - poster on the front and checklist on the back.  The new sheet was small enough to fit in my scanner: 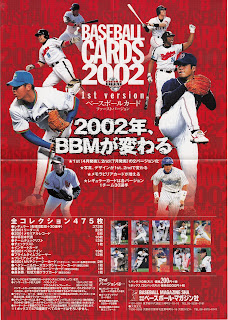 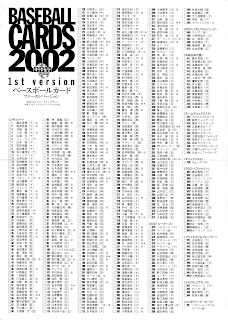 
We know someone who would be interested in that Tuffy Rhodes jersey card, don't we ...

Both the single and the combo one, yep.