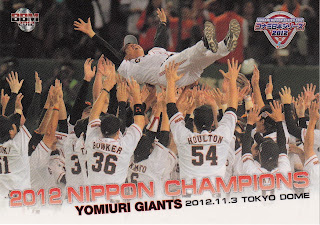 The 2012 edition of BBM's annual Nippon Series set (traditionally the final set of the "card year" for BBM) was released back in December.  It's a 72 card boxed set commemorating the Giants defeat of the Fighters in six games in last year's Series.  There's 32 cards for the Giants players (and manager Tatsunori Hara), 34 cards for the Fighters (and manager Hideki Kuriyama), five cards for the award winners (MVP Tetsuya Utsumi, Fighting Spirit Atsunori Inaba and outstanding players Hisayoshi Chono, John Bowker and Shonnosuke Abe) and one card showing the Giants celebrating (#S72 above).

There's a surprising number of players in the set who did not appear in either the 1st or 2nd Version sets this year - 13 Fighters (Yuji Iiyama, Yuya Ishii, Takahiro Imanami, Manabu Iwadate, Dustin Molleken, Kazuya Murata, Masaru Nakamura, Takuya Nakashima, Haruki Nishikawa, Kenshi Sugiya, Kazuhito Tadano, Toshiyuki Yanuki. and Mitsuo Yoshikawa) and 10 Giants (Satoshi Fukuda, Shigeyuki Furuki, Dicky Gonzalez, Yoshihito Ishii, Ken Katoh, Yuki Koyama, Kazunari Sanematsu, Takahiro Suzuki, Yasunari Takagi, and Kenji Yano) for a total of 23 of the 64 player cards, over a third.  There's probably a number of factors contributing to this high number - the smaller 1st Version set the BBM's been doing lately and I think both teams had a number of injuries coming into the Series (neither Kensuke Tanaka of the Fighters nor Toshiya Sugiuchi of the Giants appeared in the games for example).  Still, that's a lot of guys who were no shows in the "flagship" sets.

The photography is pretty good for the set although I have my usual complaint that it's difficult to see any real evidence that the pictures were taken at the Series.  I was really impressed with the picture of Tetsuya Matsumoto until I realized that BBM used a very similar shot for him in the 2009 Nippon Series set.

Here's some sample cards.  You can see all of them at Jambalaya:


I wonder how much it bothers BBM that Konami sponsors the Nippon Series and they are forced to put a competitor's name on their cards?

I noticed the Konami logo when I picked up my sample card. But I wonder if BBM even sees Konami as a competitor - sure, they make cards, but it seems that most gamers don't collect normal cards and most normal collectors don't collect game cards - other than team collectors perhaps. And there are exceptions. If I was BBM, I'd look at Konami as Topps probably does the current state of Upper Deck. But perhaps with more respect...

At this point, I'm not sure BBM really sees anyone, even Calbee, as a competitor.

But I do see your point about BBM and Konami serving two different markets - I don't really care much about the Konami and Bandai issues. Part of that is that they are harder to come by in the States but most of it is that I'm just not interested in the game cards. Beyond the 2009 Konami WBC cards that is.