It was looking a little grim for Samurai Japan yesterday.  Going into the bottom of the eighth, they were down 2-0 to Team Australia and had been held to only one hit.  But with one out, Sho Nakata and Hirokazu Ibata hit back to back singles and then Ryoji Aikawa stepped to the plate:

Aikawa's home run accounted for all three runs Japan would get and need as Kazuhisa Makita struck out the side in the top of the ninth to preserve the 3-2 win.

Aikawa actually had just entered the game that inning as starting catcher Shinnosuke Abe had been pinch run for the previous inning.

Aikawa is in his fifth season with the Swallows after spending the previous 14 seasons with Yokohama (although only ten of that at the ichi-gun level).  Here's a card of him from his BayStars days from the 2005 BBM BayStars team set (#YB34): 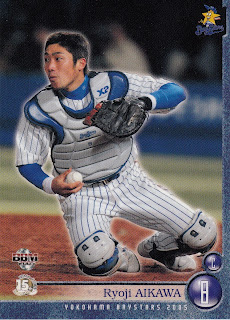