I've been intrigued for a while about the fact that a 36 year old Yutaka Enatsu went to spring training as a non-roster invitee with the Milwaukee Brewers in 1985, ten years before Hideo Nomo joined the Dodgers.  I was curious if there was anything out there showing him with the Brewers.  Last week, I finally hit the jackpot - an AP photo from March 13, 1985 showing him making his Cactus League debut against the Giants (San Francisco as opposed to Yomiuri): 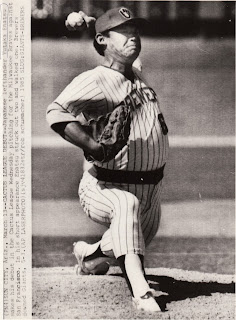 He had also merited an appearance in the Brewer's Media Guide that spring: 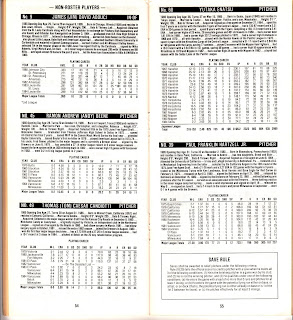 I don't know how many appearances he made for the Brew-Crew that spring, but obviously he didn't make the club and he retired.

I know that Topps did cards of Jose Canseco in their Second Series in both 2001 and 2002 with teams that he went to spring training with but never made a regular season appearance with (IIRC it was the Angels in 2001 and the Expos in 2002).  Too bad Topps couldn't have done an Enatsu card in the 1985 set.
Posted by NPB Card Guy at 5:08 PM