I picked up an interesting card recently off of Ebay that I thought was a menko card but it's not.  I'm not really sure what it is to be honest.  Here's the front of it which was the image I saw on the auction listing: 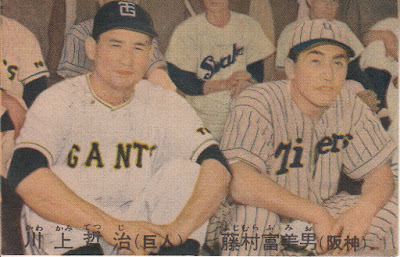 That's Tetsuharu Kawakami of the Giants on the right and Fumio Fujimura of the Tigers on the left.  I'm guessing that since there's a guy in a Swallows uniform in the background that this is from an All Star game.  I'm pretty sure that the photo is from 1953 as that was the only year that the Giants wore that insignia on their hat and the Tigers started wearing that style uniform in 1953.  If it is from 1953 then the Swallows player is Masaichi Kaneda as he was the only Kokutetsu player to make the CL All Star team that year.

The first thing that told me that this wasn't a menko card was that it's larger than a typical menko card from the 1950's - it's almost "standard" card size.  It's also on much thinner stock than most menko cards are.  The last thing was what the back looked like: 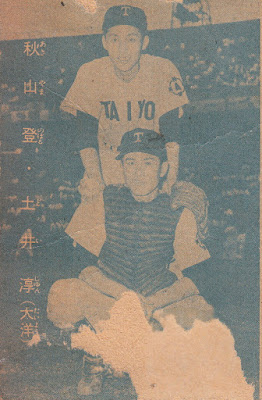 Needless to say this is not a typical menko card back.  This photo shows Noboru Akiyama (standing) and Kiyoshi Doi (squatting) of the Taiyo Whales.  The Whales wore these uniforms in 1955 and 1956 but neither player debuted with the team until 1956 so that narrows it down.

So I'm guessing that this is some sort of bromide card instead of a menko but I've never seen another bromide that has photos on both sides.  It's also really weird that the photos are from three years apart although I guess it's not unheard of card makers from that era reusing older photos.  I was able to digitally search the latest Vintage Guide from Engel but I didn't find a card meeting this description.  I'm basically stumped on this one.
Posted by NPB Card Guy at 8:50 PM

Interesting. I am wondering if you have a magazine-issued bromide. They often came printed on both sides. You definitely don't have a menko as there are no Fighting Numbers or Gu-Choki-Pa symbol. I don't have any comparable sumo card so it is definitely unique. Nice pickup and I hope you can figure it out!

Thanks for the response. I was kind of wondering if it had come with a magazine. Would it likely have been something cut out of the magazine?

It might have actually been cut out of a magazine. Maybe it wasn’t intended to be a card, but the images line up to well so I’m not sure.

I would run this card past Robert Klevens and/or Rob Fitts. I've seen this "card" before, but don't have any specific info on it. I agree that the front/back lining up is in favor of its being considered a "card", though I was once purchased a "card" on card-like stock that turned out to have been simply a photo cut from a publication. If truly a "card", this might be referred to as a colorized bromide. There are certainly many variations of menko, bromides, and cards that don't conform to basic standards, part of what makes the hobby fun. I like your sleuthing efforts on dating, we do a lot of that with the older cards.

Thanks Ralph. I've been thinking about asking those guys but I just haven't gotten a chance to do it yet.