I included a Takara Kids card of Yutaka Enatsu in a post a few weeks back and Fuji commented that it was an awesome looking card.  That inspired me to do a quick post about the set(s).

Takara made game sets for NPB teams from 1978 to 1998.  Each team's set would contain 30 cards.  They are somewhat significant in that they were the first cards in Japan to feature that many players per team - the other card sets usually only featured a handful of the star players on each team - even if the set had 1400 cards like the 1975/76/77 Calbee set.  It wasn't until BBM came along in 1991 that other manufacturers started putting a larger number of players in their sets.

That being said - I am not really a big fan of the Takara sets, especially the ones from before 1991.  I like my baseball cards with big, beautiful, full bleed, interesting photos on them.  Takara cards have almost always had big borders - at least on the top and bottom - and all the photos on them from before 1991 are "mug shots" - a posed photo of the player from the chest up.  A lot of their designs also looked similar from year to year which isn't always a bad thing (I see you Calbee!) but the combination of similar designs and similar photos is just monotonous.

The one exception to this is the 1984 Takara Kids sets.  Well, it's kind of an exception - the photos are still mug shots - but at least it looks different than all the other Takara sets.

The Kids sets - so named because it was a simplified version of the game marketed towards kids - contained only 20 cards per team.  The cards were printed on thicker cardboard than normal card stock and in many ways resemble menko cards.  The fronts are simpler than the "normal" Takara cards and are much more attractive.

The backs are really what make these cards look like menko.  Here's the back of Enatsu's card: 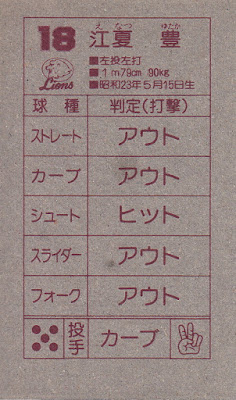 It's got the "rock-paper-scissors" symbol on the bottom right - these frequently appeared on menko cards from the 1940's, 50's and 60's.

I have two complete Takara Kids team sets - the Tigers and the Orions - plus a mostly complete Giants set (missing one card) and the Enatsu card.  Here's a couple example cards from the Giants, Orions and Tigers sets - the Ochiai card is the earliest one I have of him:

These are gorgeous! Love the design and how colorful the cards are.

Love the cards, especially the size and thickness - it is almost like a menko card, hence the Takara Kids. I happen to kind of like the Takara cards, and have four sets from the 1990 Takara release.