I've been convinced for years that it's a toss up between the cards issued by the teams themselves (or their fan clubs) and the cards BBM has issued in magazines that are the biggest blind spot in the cataloging of "modern" (post-1990) Japanese baseball cards.  I've struggling to make sense of the baseball cards that BBM has given away with issues of Shukan (Weekly) Baseball for a while now and not made a lot of progress.  The one thing I did know was that what the cards were like changed around September of 2010.  Before that there would be three to five cards issued in the magazines that had cards with them but after that it appears that there were only two cards per issue.  Additionally since 2010 the cards have pretty much all been promo cards for BBM's sets.  While some of the cards from the 00's are promo cards, the majority of them used designs that BBM has not used anywhere else.

I learned some new things recently about how the pre-2010 cards were distributed from Deanna Rubin.  Deanna moved recently and was kind enough to send me a large box of Japanese baseball stuff - mostly magazines but also a bunch of baseball cards.  The baseball cards included some of the Shukan Baseball cards, including some in their original envelopes in the magazine!

Let me show you one of these cards and what I had originally thought about it.  Here's the front and back of a card of Byung Kyu Lee that was given away with the October 8, 2007 issue of the magazine: 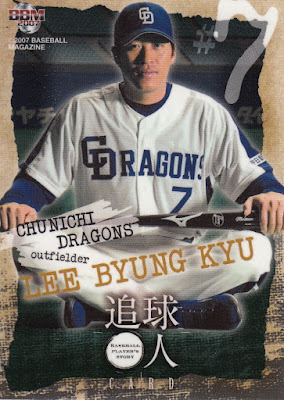 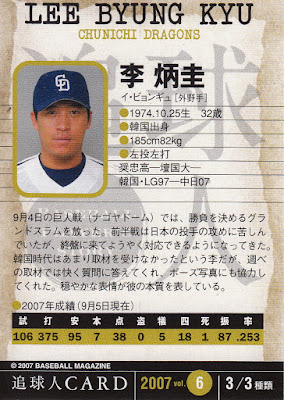 You'll notice the numbering in the lower right corner on the back of the card.  It indicates that this is volume 6 from 2007 and the card is 3 of 3.  Now that volume 6 doesn't mean the issue number (which was 45) but that it was the sixth issue of the magazine in 2007 that has cards in it.  What I had originally thought the "3/3" meant was there were three cards issued with the magazine and that all three were included in the envelope.

I was wrong on both counts.

First of all, there were actually four cards issued with this magazine.  The other card was a promo for a set called "The Climax": 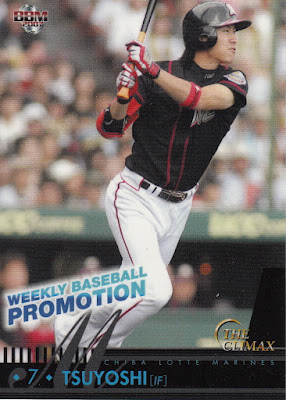 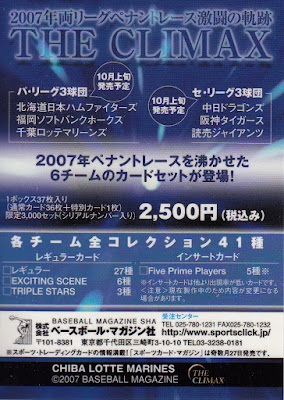 You'll notice that this card doesn't have ANYTHING on the back that would make you realize that it came with the same magazine as the Kim card.  The only way you'd know is by looking at the envelope that the cards were shipped in with the magazine: 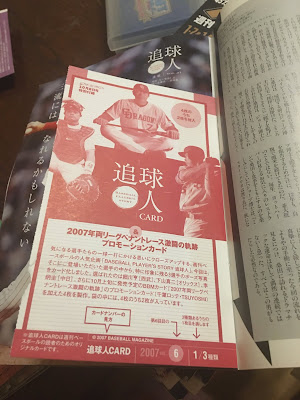 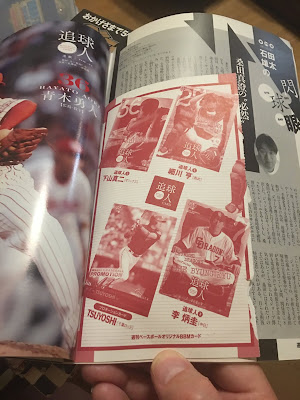 The second part that I was wrong on is how many cards were in the envelope.  When I said that the magazine had four cards issued with it, what I really meant was "there were four different cards that you COULD pull from the magazine" because you only got two of them!  I'm guessing this was a marketing decision from BBM to try to force you to buy multiple copies of the magazine but how many people were going to buy another copy at 380 yen a pop for a chance to get the other two cards?

This was the only issue that Deanna sent me that still had the envelope in it.  She sent me a couple she had pulled out of the magazine but only one of them was from before 2010.  These two cards were included in the May 9th, 2005 issue: 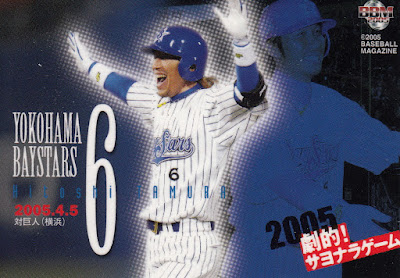 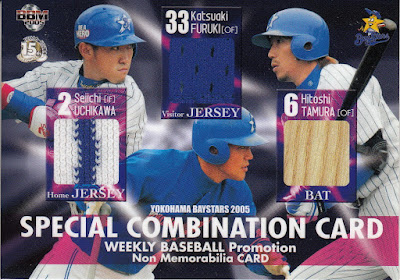 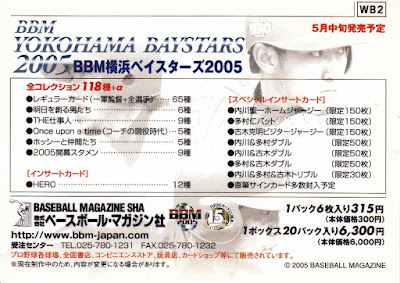 As was the case with the other issue, there's nothing on the back of the promo card to tell you it's from the same issue as the solo card of Tamura.  In fact, it has a numbering scheme that's completely separate - I don't know what WB1, 3 or 4 is but WB5 is a Norichika Aoki promo from Touch The Game and WB6 is a promo from a Kazuyoshi Tatsunami set.

Again, the only way to know that this promo card came with this issue of the magazine is if you see the envelope that the cards came in: 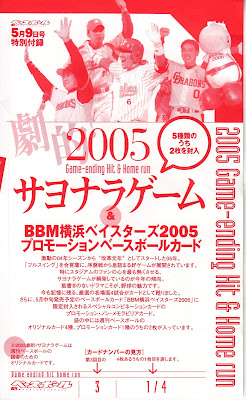 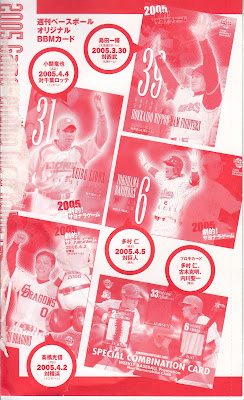 Thanks, Deanna, for sending me these cards and helping me to understand how they were distributed (and making me understand why I never seem to find all the cards from a single issue whenever I've picked up a bunch of these cards).