Earlier this week, Comatoad On Cards asked the question "What's Your Oldest Sports Card?"  I don't think he meant is as a "blog bat around" but it sounded like a good one to me so I'm going to take it and run with it.

There's a group of cards that I'm pretty sure are the oldest Japanese cards I have that show individual players (as opposed to just generic players).  There are six bromide cards I have that probably date from 1946 or early 1947.  These six cards represent four different sets but only one of those sets is cataloged.

These two cards - Seizo Furukawa of the Chubu Nippon Dragons and Kazuto Tsuruoka of the Kinki Great Ring (who went by Kazuto Yamamoto at the time) - are from the set Gary Engel has cataloged as "JBR 73 - 1947 Marutoku B&W Bromides".  As the name implies, Engel dates this set to 1947 but he states in his description for the set that "Players are featured in their 1946 uniforms...so it is assumed that this is a pre-season 1947 set, making it the earliest checklisted postwar baseball card set." 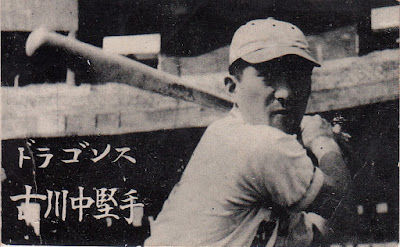 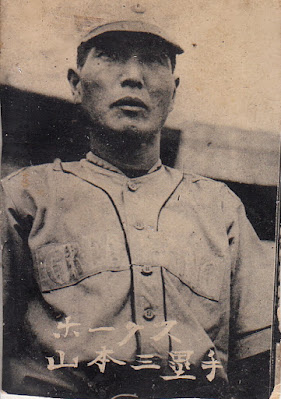 Like the JBR 73 cards, the other four cards I have (from three separate, uncataloged sets) feature players in their 1946 uniforms.  This is clear because the two teams represented - Goldstar and Pacific - only went by those names in 1946 (Goldstar became the Daiei Stars who eventually merged with the Mainichi Orions and are now the Chiba Lotte Marines while Pacific became the Shochiku Robins who merged with the Taiyo Whales who are now the Yokohama DeNA Baystars).

Half of these players are Hall Of Famers (Tsuruoka, Nishizawa and Starffin).  The photo on the Starffin card is identical to his JBR 73 card but the text is different and the card is larger than the JBR 73 cards.

These may not be the oldest Japanese cards in my collection however.  I have a small uncut menko sheet depicting generic college baseball players that resembles some cards shown in "Sayonara Home Run!: The Art Of The Japanese Baseball Card" that date from the 1920's: 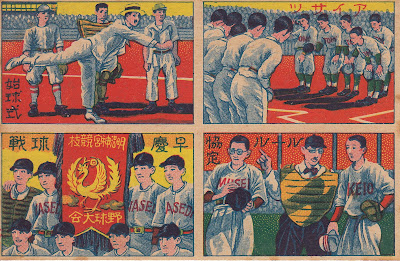 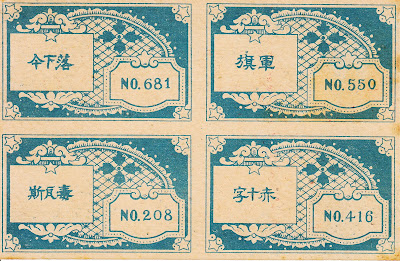 But the actual oldest cards in my collection are two of the few American cards that I've kept.  The first is a T205 card of Arlie Latham.  I got interested in Latham when I read Bill James' "The Historical Baseball Abstract" because his name seemed to keep popping up.  The 19th century gave us some great nicknames for baseball players (none better of course than Bob "Death To Flying Things" Ferguson).  Latham's reputation as a jokester earned him the nickname "The Freshest Man On Earth".  He played in the majors from about 1880 to 1899 and then spent time in the minors as both a manager and umpire from 1900 to 1908.  In 1909 he returned to the majors as a coach for John McGraw's Giants - the first person to ever be a full time coach for a team.  He actually played in a couple games that season at age 49 and stole a base - becoming the oldest major league player to ever do so.  That record still stands.  He later lived in England and taught King George V about baseball.  Even later he worked in the press box at the Polo Grounds and Yankee Stadium.  He passed away in 1952 at age 92.  It's alway struck me as amazing that a guy who played baseball with the early greats like George Wright and Cap Anson lived to see Mickey Mantle play. 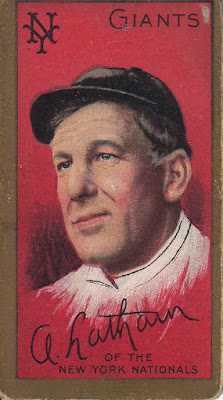 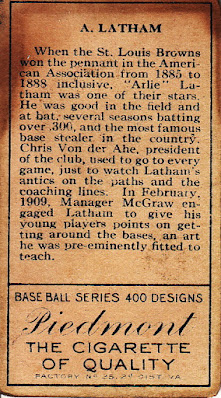 The second is a T206 card of Jack Dunn, the owner and manager of the International Leagues' Baltimore Orioles.  Dunn's biggest claim to fame was discovering a local kid at a reformatory school in Baltimore in 1914 and signing him to a contract.  The player was so raw when it came to anything other than baseball that he got dubbed "Dunnie's Babe" by the other players.  Dunn had a problem that season, however, as the Federal League had placed a rival team in Baltimore literally across the street from his ballpark, causing him to lose enough money that he was forced to sell a bunch of players to major league teams, including selling his "Babe" to the Boston Red Sox where he became a star (and eventually got sold again to the Yankees but that's a different story).  Dunn ended up moving the Orioles to Richmond, Virginia until the Federal League folded.  After returning to Baltimore he built a powerhouse team, winning seven straight International League pennants from 1919 to 1925.  Another Maryland native that he discovered, Lefty Grove, pitched for five of those pennant winning teams.  Dunn passed away from a heart attack in 1928 but his family was involved with baseball in Baltimore for years afterwards. 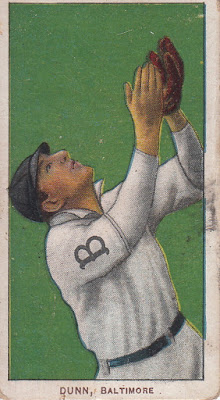 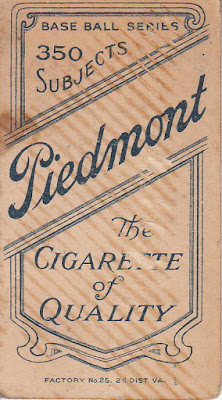 Nice! I love the older menko and bromides!

Dang. The artwork on that uncut menko sheet is fantastic!

Nice ones, those bromides are cool.

Like you I'm not 100% sure what my oldest Japanese cards are. I have some that are menko catalogued from 1929, but there are quite a few generic baseball menko (ie not featuring an identifiable player with a given team) which seem to be from the same time period or earlier which are impossible to date.