On Friday Swallows pitcher Masanori Ishikawa picked up the win in a rain-shortened 10-1 victory over the Lions.  As a result, Ishikawa became the first ever former collegiate player to win at least one game each year for 20 years in NPB.  (H/T NPB Reddit)
Ishikawa was the Swallows top pick in the 2001 draft (kind of - he was acquired as a "free acquisition slot" player which means essentially that he and Yakult agreed on a deal before the draft) out of Aoyamagakuin University where, among other things, he was a member of the 2000 Japanese Olympic baseball team.  Here's a card showing him in his college uniform from the 2011 BBM Tohto 80th Memorial set (#79): 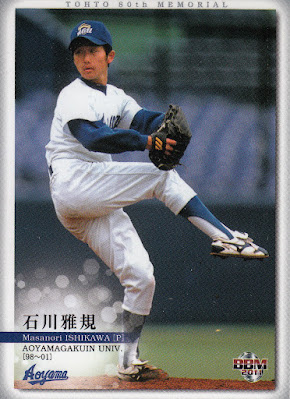