Former Orix Buffaloes pitcher Brandon Dickson (not to be confused with current Tohoku Rakuten Golden Eagles outfields Brandon Dixon) signed a minor league deal with the St Louis Cardinals recently.  I don't believe he's on the team's 40 man roster (he's currently playing for the Cards' Triple-A team in Memphis) so he should still be eligible to play for Team USA in the Tokyo Olympics next month.  I bring this up simply because he pitched for Team USA in both the Premier 12 in 2019 and the America's Qualifier earlier this month.

Dickson had originally intended to spent this year in Japan with Orix but ultimately asked the team for his release when he was unable to bring his family to Japan as well.  Dickson had been in Japan without his family in 2020 and was unwilling to do it again in 2021.  Several players have had issues with this this season - Jason Smoak of the Giants returned to the US a week and a half ago because he wanted to be with his family and John E. Gibson had a heart-wrenching interview with Zach Neal of the Lions on last week's Japan Baseball Weekly podcast about the issue.

One odd thing about Dickson's circumstances - he has 2021 Japanese baseball cards showing him as a member of the Buffaloes!  One of the things I really like about Japanese baseball card sets is that they are almost always as up-to-date on the team roster as they can be.  For example, back in 2016 BBM issued their annual "comprehensive" team set for the Giants with a missing card - Kyosuke Takagi (card #10 in the set) had been released by the team between the set going to press and being released so they removed his card rather than issue a card for someone who was no longer with the team.  It's pretty rare that a set will come out with a player who not appear with the team.  Off hand, the only other time I can think of it occurring was 2015 when Yulieski Gourriel was expected to return to the Baystars for a second season but ended up staying in Cuba - he had two cards in BBM's 1st Version set that year.  Dickson not only appears in BBM's 1st Version set this year but also BBM's "comprehensive" team set for the Buffaloes, along with Epoch's NPB and Buffaloes Rookies & Stars sets.  The only one of these cards I have so far is from 1st Version (#144): 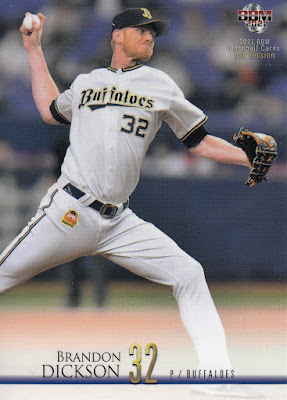