I picked up this card off Ebay recently and had a difficult time trying to identify it.

Looking at Engel, the back matches the 1958 JCM 29 "Cartoon Catcher Back" set.  The menko number indicates that it's Atsushi Aramaki of the Daimai Orions.  But I wasn't quite sure of that - the uniform looked kind of like the Hawks to me and I couldn't see any text on the card that confirmed it was Aramaki.  I guess I was kind of hoping it was actually Tadashi Sugiura.  But when I scanned the card in and looked at a enlarged image, it became clear: 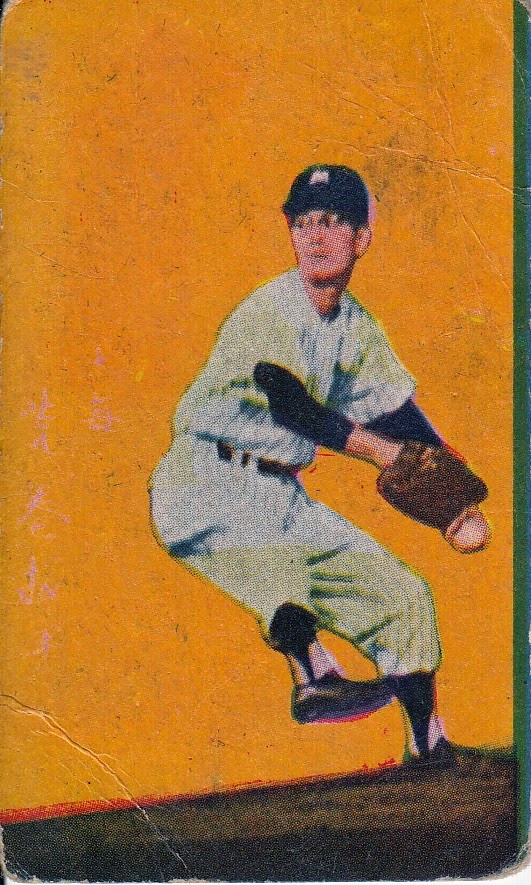 With the enlargement, I can see that the uniform has pinstripes, like the Orions uniform did in 1958.  I can also see (although it's very difficult) that there is actually text on the front.  The text is to the left of the player and is next to impossible to see because it's white or creme colored on the yellow background.  So the conclusion is that it's Aramaki after all.
Posted by NPB Card Guy at 5:18 PM

This is one of the more strikingly beautiful cards I've seen posted here in a while. What an incredible pick-up! I'd love to find one of these to call my own, but I doubt that happening any time soon, here in the U.S.

Congratulations on a stellar find, JBC!

Thanks. I got the card off of Ebay from someone in Montana so it is possible to find these here in the states.

The trademakr at the upper left on the back (below the top panel) indicates that the issere was Irifunedo.

Sorry, I meant to type the identifying trade mark is at the upper right on the back, not upper left.
Dennis

Thanks! I never noticed the trademark before.