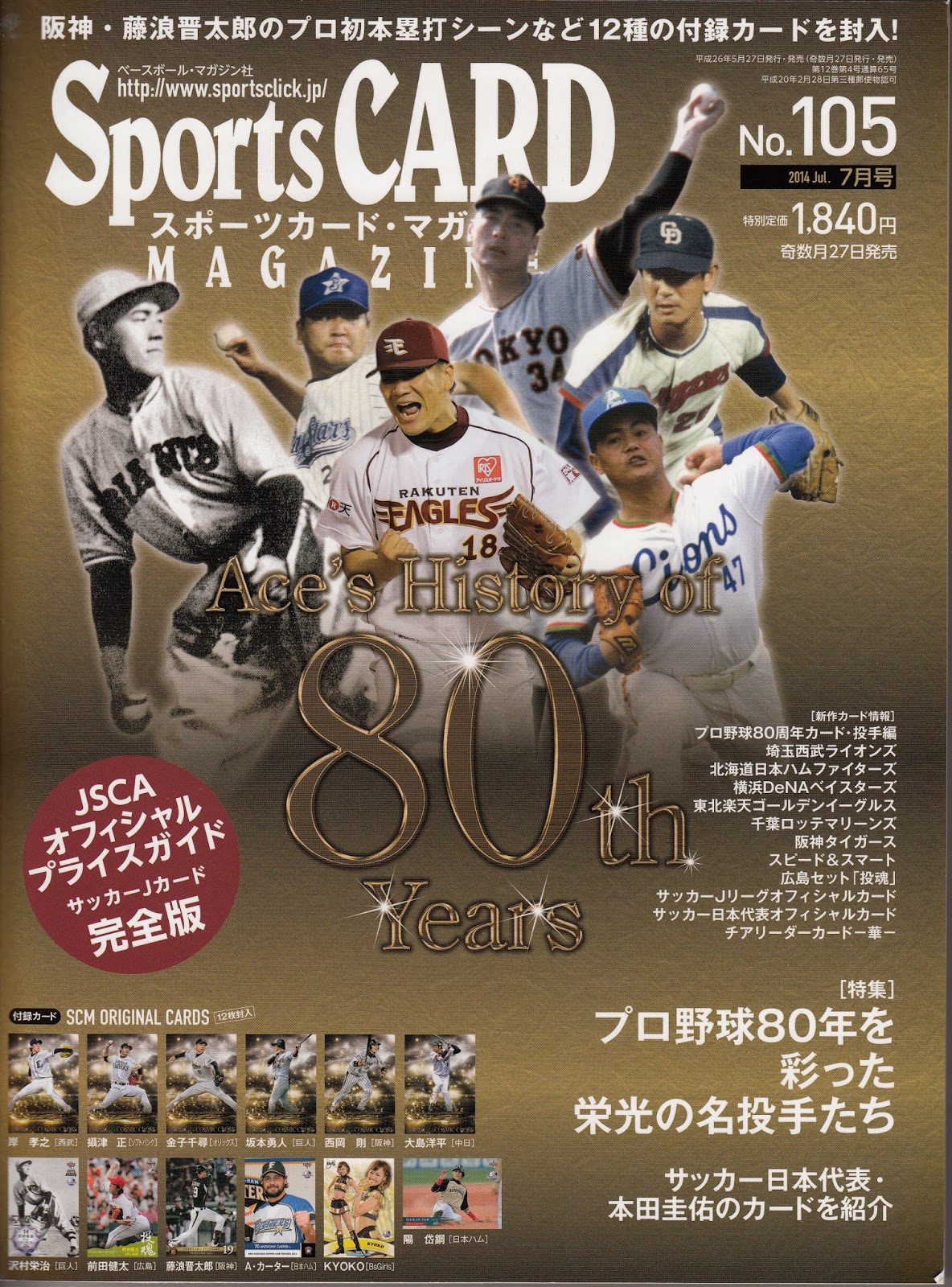 Sports Card Magazine #105 hit the news stands in Japan on Tuesday of this week.  I got mine yesterday via Amazon Japan.  As always it is of limited use to me as a non-Japanese reader, but there are a number of fun things in it (besides the 12 promo baseball cards).

This issue features a three page cover story on the just released 80th Anniversary Pitchers Version set - all three pages are in full color and show off a number of cards from the set as well as some other cards of pitchers who for whatever reason are not in the set - I think the article is highlighting some career statistical pitching leaders and a couple of guys on the leader boards (Hideo Nomo for instance) aren't in the new set.

There's also full page color ads for several of BBM's new releases - the afore mentioned 80th Anniversary Pitchers Version set; team sets for the Lions, Fighters, Baystars, Eagles, Marines andTigers; and the Dancing Heroine Hana set (for team cheerleaders and dance squads).  There's also a page with half page ads for the Speed & Smart and Pitchers Spirit Of Carp (what I called the "Totomashi" set the other day) box sets.  I will point out that the ads for BBM's sets show more information than what their corresponding web pages show.  There are also full page color ads for a couple of new J-League sets and Calbee Series Two.

There's a section in every issue called "SCM Headline" that lists a "Best Card Of This Month", "Best Item Of This Month" and two "Hot Card Lists" - one for rookie cards and one for autograph & memorabilia.  It will probably not come as a huge shock that the top items always seem to be BBM items, although in fairness, I don't know how the items are chosen.  The "Best Card Of This Month" (which is an odd title considering SCM comes out every two months) is an autographed Shigeo Nagashima card from BBM's "The National Honor" set, which happens to be the "Best Item Of This Month".  Seven of the hot rookie cards are from the 2014 BBM 1st Version set - Daichi Ohsera (#1 on the list), Yuki Matsui (#2), Allen Kuri (#3), Daiki Tohmei (#4), Tomoya Mori (#8), Seiji Kobayashi (#9) and Shota Suzuki (#10).  Two of the others are from this year's Calbee Series One set - Ohsera (#6) and Matsui (#7).  The remaining card is the only one not from this year - Masahiro Tanaka's 2007 1st Version card (#5 of the list).  The top autograph and memorabilia card is the Shigeo Nagashima card mentioned before.  The other cards (all autograph cards) include two cards of Masahiro Tanaka (2007 BBM Eagles and 2013 Genesis), two cards of Saichi Ohsera (2014 BBM Carp and 2014 Front Runner Trading Cards Carp Rookie And Young Stars), a 2014 BBM 1st Version Shohei Ohtani, a 2014 BBM Eagles 10th Anniversary Katsuya Nomura and "The National Honor" card of Sadaharu Oh.  The other two cards are for a J-League player (Keisuke Honda) and a boxer (Joichiro Tatsuyoshi).

BBM rotates what checklists it includes in each magazine.  This issue has the complete J-League card listings starting in 1993.  They also have checklists for most of the new and upcoming BBM issues as well as most of the recent BBM, Calbee and Epoch/OB club releases (no Front Runner Trading Card sets though).

There is more included in the magazine but this was the stuff that was most helpful/interesting to me.

There were 12 promo cards included in the magazine.  Six of them were the latest Cosmic Cross cards and the other six were promos for new BBM sets.  I'll going to show the promos here because it'll be one of the few times I can show a card for a set before Ryan does (actually he's already done a post on the Speed & Smart set).

The first four cards I'm going to show are pretty much run-of-the-mill BBM promo cards.  Other than a change in the color of the graphics, the cards are identical to the corresponding card in the set (I'm making an assumption in the case of the Dancing Heroine Hana card since it's not out yet):


The other two are a little more fun.  First, there's this card for the BBM Tigers set:

Kind of a cool picture but what makes it fun is that it is not the picture used in the actual set.  According to BBM's website for the set, the real card will look like this:

The final card is for a late signing Fighters player.  Anthony Carter joined the Fighters in late April after starting the season with the El Paso Chihuahuas, the AAA team of the Padres.  He signed too late to make BBM's Fighters team set so they made up a card for him that extends the set.  It actually is numbered #F91 as well as having the SCM card number: