In March of 1975, the Yomiuri Giants traveled to Vero Beach, Florida for two weeks of training at the Los Angeles Dodgers spring training camp.  This would be neither the first of the last time that the Giants would go to Dodgertown, but this particular trip is significant for one reason - photographs from the Giants visit were used in Calbee cards that year.

I only have a couple other cards from this subset:

I've been trying to figure out what coach wore uniform #75 for the Dodgers in 1975 but I've not been able to so far.

I've seen one other card from this subset that shows a Giants pitcher pitching to a Montreal Expo batter.  I'll be keeping an eye out to see what the other cards show.

UPDATE: Sean asked about the card I mentioned above.  I knew about the card because I had been outbid on it a few months back on Ebay.  I took a look and was able to find the listing again, so here are the images from it - it's card #703 (Kazumi Takahashi): 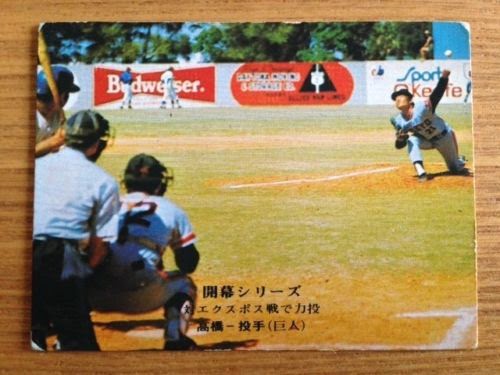 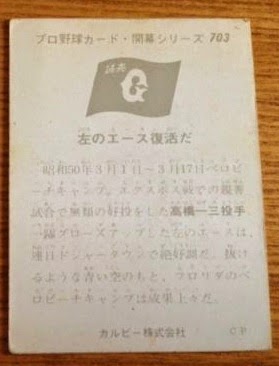 Somewhere along the line I think I had read that these were out there but that never really sunk in. I think I'm going to try to collect the full subset.

Those look awesome. Actually, do you know any details about the card with the Expos player? I MUST have that for my Expos collection....and also for my Calbee collection. Such an unusual combination of my two card collecting interests.