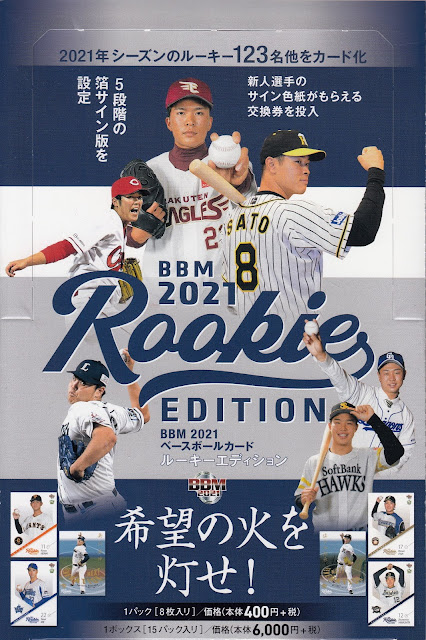 Rookie Edition, BBM's annual set for the players taken in the latest NPB player draft, was released about two months ago.  I had picked up a set through JAUCE but decided to wait until I also used them to get the Calbee Series One and BBM 1st Version sets and could have all three sets sent in one shipment.  So I'm a bit late getting around to this set this year.

If you've read any of my posts about the previous editions of this set, you pretty much already know a lot of what I'm going to say.  Let's get my annual generic comment out of the way before getting into the specifics:  as usual the photos of the players are all from the press conferences that the teams had to introduce the draft class so they're the usual boring photos of guys holding up a baseball or a bat or raising a first in a "guts" pose.  It would be SO much more interesting if they showed the players wearing their high school/college/corporate league/indy league uniforms instead.  Hell, I'd take their high school graduation photos like Topps did for their draft pick cards back in the early 90's just for the change of pace.

This year's set contains 135 cards which are split up into 123 cards for the players taken in last fall's draft and the 12 card "Early Days" subset.  The drafted players are from both the regular phase of the draft as well as the ikusei (development player) draft.  This is pretty much the only set BBM does that will include the ikusei players so for a bunch of those players this may be the only baseball card they ever have.

Most years this will be the first card for all of these players but this year a handful already have had cards.  10 of the drafted players played for the Collegiate National Team in either 2018 or 2019 (or both) and had cards in Panini's 2019 and 2020 USA Baseball Stars & Stripes sets.  This includes several of the hot rookies of the season so far - Teruaki Sato, Shugo Maki, Takahisa Hayakawa and Hiromi Itoh.  In addition there were Epoch One cards issued back in December for the six players the Dragons took in the regular phase of the draft.

The card design is pretty basic and for the sixth year in a row features the player centered in a geometric figure.  This year it's either the bottom half of a hexagon or it's meant to be the shape of a home plate.  Here's some sample cards:


The Giants have the most players in the set as they picked a whopping 19 between the regular (7 players) and ikusei (12 players) phases.  In fact the Giants picked so many players they ran out of names and had to reuse one that one of their players was already using:

OK, so that's kind of a poor joke but my next comment may sound like a joke but isn't - for the fourth year in a row there's a "secret" version of the cards for each team's first round draft pick.  These are short printed photo variations that feature a different boring posed photo of the player.  I didn't get any of these.

Every year BBM includes some active or OB players in a subset in this set - basically as an excuse to include autographed cards of them.  The past few years this has been in the form of a 12 card subset called "Early Days" which features one player from each team shown when they were drafted.  Players featured this year include Sho Nakata, Eigoro Mogi, Yudai Ohno, Keta Sano and Ayumu Ishikawa.  Here's Nakata's card:

Despite my complaints about this set I still feel it is an essential set to get every year.  I just wish BBM would do something a little different with it.

As always you can check out all the cards in the set over at Jambalaya.

Dang. Matsukihira looks like he could be one of my middle school students.

The older I get, the younger all these guys look. Most of these guys are younger than my youngest kid so I'm really starting to feel old.