I had mentioned a few weeks back that I had picked up the Special Limited Edition Box Set that Calbee had put out as some sort of Lucky Card redemption (I think) with their Samurai Japan set this fall.  I received the set today in the mail and thought I'd do a quick post about it.

The set contains 8 cards and each card highlights a different game that Samurai Japan has played in the last two years.  In fact, I believe that the cards cover all the games that Samurai Japan has played from November of 2017 (the Asia Professional Baseball Championship) until the two friendlies they played against Mexico in March of 2019 with the exception of the six games they played against the MLB All Stars in November of 2018.

Each card features a different player (ok to be fully accurate one features manager Atsunori Inaba) but there's actually nothing on either the front or the back of the card that identifies the player.  If it wasn't for the checklist on Calbee's website, I wouldn't know for sure who everyone was in the set.

Here's all eight of the cards:

The card backs feature the Samurai Japan portion of the game's box score.  Here's the back of Tamura's card as an example: 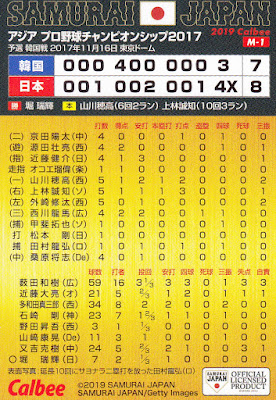 By the way, Japan didn't win all eight games.  They lost the game against Chinese Taipei on November 7, 2018 (kind of a warm up for the games against the MLB All Stars) and Game 1 against Mexico on March 9th of 2019.

As I mentioned when I posted about picking up the set, this was not cheap.  But I'm glad I got it - it's a beautiful little set.
Posted by NPB Card Guy at 8:48 PM

Love any set that commemorates Samurai Japan! I'm so bummed that I didn't buy one of those white pinstriped jerseys when I had the chance.