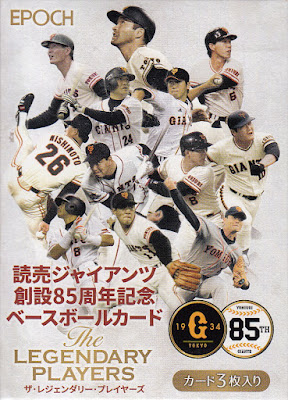 I bought one of the latest KBO sets from Dan Skrezyna recently (which I'll posting about soon) and there was an unexpected surprise in the box he sent the set in.  Dan has a PC for Lee Seung-Yeop, the Korean baseball legend, and I've occasionally been the beneficiary of Dan's generosity when he has to buy a card lot or a complete set when he's trying to get a particular Lee card.  For example, a couple months ago he sent me two near complete Giants team issued sets.  This time Dan sent me a near complete 2019 Epoch Giants 85th Anniversary set.

This was one of Epoch's ultra high end sets where a six card box runs 16,500 yen (~$154) although two of those six cards will be autographs while one of the others is a parallel card.  The base set has 37 cards, there is a parallel for each base set card and everyone in the set has three types of autographed cards.  I think there's also a card featuring three player autographs available.  What Dan sent me was the base set minus two cards - Lee and Tatsunori Hara (which he sent to Ryan for his type collection).

The cards are nice - they've (obviously) got a bit of a high end feel to them as they're shiny.  I think they used a sturdier card stock for them as well as the cards feel less flexible than normal although the cards don't appear to be any thicker than usual.

The players included in the set are all retired Giants.  Besides Lee and Hara, the set contains other big names like Shigeo Nagashima, Isao Harimoto, Tatsuro Hirooka, Tsuneo Horiuchi, Yoshinobu Takahashi, Masumi Kuwata, Hiromi Makihara, Masaki Saitoh, Hideki Okajima, Masaaki Mori, Norihiro Komada and Kiyoshi Nakahata.  I complain regularly that since BBM and Epoch's historic sets pretty much exist to have autograph cards of OB players, the player selection for those sets skews towards players active in the 1970's and later with just a handful of earlier players.  I feel like with this set Epoch isn't even making an effort here to act like there's any reason for this set to exist other than autographed cards.  You'd think a set to commemorate the Giants 85th Anniversary would include Tetsuharu Kawakami, Wally Yonamine, Shigeru Mizuhara, Shigeru Chiba, Noburo Aota and Haruyasu Nakajima, but since none of them are around anymore to autograph cards, they're not in the set.  I find it very odd that the set does NOT include Sadaharu Oh or Hideki Matsui.  Oh is especially puzzling as he appears in Epoch's newly released OB Club 25th Anniversary set so it's not like he's exclusive to BBM or something.  Granted he's in a Hawks uniform in the OB Club set but he's in a Giants uniform in the new BBM Time Travel 1985 set so it's not like he doesn't want to be associated with Yomiuri.  And while I made jokes about Hideki Matsui never seeing an OB set he didn't want to be in, he actually has only been in one BBM set over the last four years or so.  Other retired Giants who are still able to sign autographs but aren't in the set include Isao Shibata, Alex Ramirez and Koji Uehara.  Masaichi Kaneda didn't pass away until around the time the set was being published so he probably could have been included as well.

Here's some example cards (that horizontal scratch mark in the upper right of each card is from my scanner and not on the cards):

Dan's put the entire checklist up at TradingCardDB.com and scanned the front and back of all the cards in there as well.