I'm pretty much just a collector of base sets.  It's not that I don't like getting insert, autograph or memorabilia cards - it's just that I generally don't like paying the extra expense for them.  I will mention that lately I've been paying a little more to get some of the insert cards for BBM's sets - the "Great Record" and "Legendary Player" cards from Fusion, and the "Franchise Builder" cards from 2nd Version - but usually I pass on them.  But recently I made the acquaintance of a guy named Matt on Twitter who's a Carter Stewart collector.  He'd bought three boxes of the 2019 BBM Hawks team set to get Stewart cards.  He asked me if I'd be interested in any of his extras.  Since I already had the base set, I was curious what he'd gotten in the way of insert and autograph cards.  He sent me photos and we had some back and forth before we agreed on a deal.

For $55 I got the following insert cards:

I want to point out that the real cards look much better than the scans.  You can see all the inserts over at Jambalaya.

Wait, what's that you say?  $55 is a lot to pay for just five insert cards?  Well, yeah, there was one other card I got: 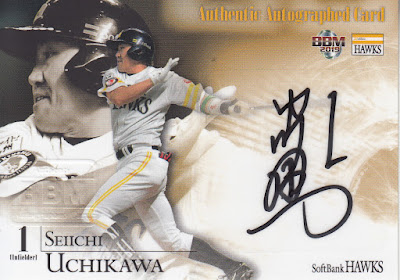 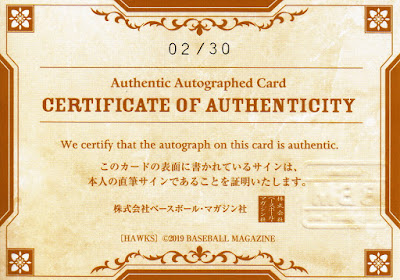 It's a sticker autograph in case you're curious.  I've got a couple authentic autographed BBM cards but this is the first one of an active player that I've gotten - the others are for OB or collegiate players.

Matt also had autographed cards from Kazuki Sugiyama and Yuki Matsumoto as well as serially numbered parallel versions of insert cards for Rei Takahashi (Elevated), Kenta Imamiya (Elevated) and Hiroshi Kaino (Closing Bell).  He also has one of the ultra rare Phantom inserts - this one's for Yuki Yanagita.

Thanks to Matt for hooking me up with these cards.  If you're interested in any of the other cards that I've mentioned that Matt still has, let me know and I'll get you in contact with him.
Posted by NPB Card Guy at 2:58 PM