SCC issued a set of cards for the KBO back in October.  This is their third set for the year following the KBO Collection set in June and the Premium set in August.  This set is entitled KBO Collection 2.  Dan Skrezyna picked it up for me and sent it to me a few weeks ago.

As is pretty standard for the SCC KBO sets, the 200 cards of the base set are split into five different varieties - I wouldn't call them subsets as each of these types really represents the "regular" card for players.  There are 89 "normal" cards (9 per team except that SK only has 8), 40 "rare" cards (four per team), 30 "holo" cards (3 per team), 21 "All Star" cards (2 per team except for SK which has 3) and 20 "signature" cards (2 per team) which feature facsimile signatures.  That works out to 20 cards total for each of the 10 KBO teams.

This all sounds pretty straight forward but the set's checklist is actually kind of confusing.  The set is numbered from 1 to 200.  Each card number represents a distinct player.  I know you're thinking "So?  Isn't that how all sets are done?"  Well, yes, but the key thing here is that there are multiple cards for some players that all have the same number!

Let's pick an example - Kang Baek-Ho of the KT Wiz is card #179 in the set.  He has three different cards in the set that all have that number on it - a "red autograph" card, a "normal" card and an "All Star" card (ok, technically he has FOUR cards in the set since he's got an "All Star Rare" card as well but it's not unusual for the parallel card to have the same number as the regular card - in fact that's kind of the definition of parallel card, isn't it?).  There's no suffix on the card number to differentiate the cards.  Here's his "normal" and "All Star" cards to illustrate this: 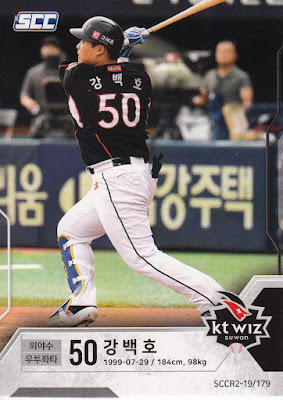 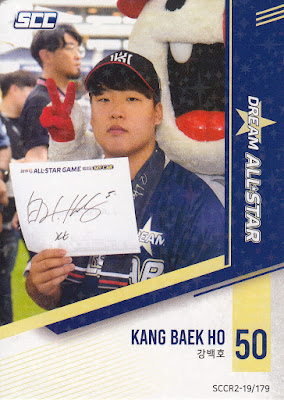 I don't envy the task that Dan had putting the checklist for this set together on TradingCardDB.com.  He ended up treating the "Normal" cards as the base set and labeling the other flavors as "Inserts And Related Sets".

As usual, there's no foreign players in the set.  Also as usual I can't speak to who's missing in the set as I don't know the KBO very well.  The four players who played in MLB a few years back - Lee Dae-Ho, Park Byung-Ho, Kim Hyun-Soo and Hwang Jae-Gyun - are all in the set along with one time Chiba Lotte Marine Kim Tae-Kyun.

The highlight of this set is the "All Star" cards.  The photos on the cards were taken at the All Star Game festivities back in July.  There's several that just show the player holding up some sort of signature paper (like Kang's above) but some of the others show the player taking part in skills competitions (I think) like this one of Jung Eun-Won of Hanwha:

There are also several cards showing players wearing various costumes at the Home Run Derby.  Since there's no foreign players there's no card of Jamie Romak dressed as Douglas MacArthur (Romacarthur) but there is a card of Choi Jeong of SK dressed as a factory worker with "Home Run Factory Owener" across his back:

There's also a card of Lee Hak-Ju of Samsung wearing...something:

As you can tell, the "All Star" cards have the player's name in English.  It's in English on the "Holo" and "Autograph" cards as well but the "Normal" and "Rare" cards only have the names in Korean.  Here's examples of the other card types:

As usual, the backs of the cards are identical: 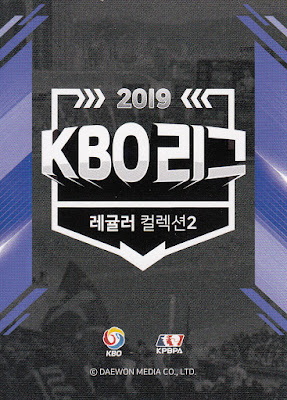 I want to thank Dan for getting the set for me!
Posted by NPB Card Guy at 7:49 PM

When making these checklists, the simplest way is to first create a checklist for all 200+ cards. Then for each "subset," I subtract cards not in them and save them seperately.

If I remember correctly, Lee Hak-ju borrowed the Samsung Lions cheermaster's cape for that at-bat.

Dan is correct, Lee Hak-Ju is wearing the cheermaster's cape. Hak-Ju lead the crowd in his chant before his at bat, it was pretty cool to see if you can find video of it

What about the Kang Baek Ho card that has a piece of the jersey on it. in the bottom left it says SCCP1-19/197. Don't know if if it a game worn or not. My brother inlaw was stationed in Korea and I asked him to bring me a box. Seems to be a decent set and well made too.

That card is not from this set - it's from the 2019 SCC Premium set. These cards have a prefix of SCCR2-19 while yours is SCCP1-19. I don't think this set had any memorabilia cards, just autographs