Card Of The Week December 22

I picked this card up a couple weeks ago from a seller on Ebay: 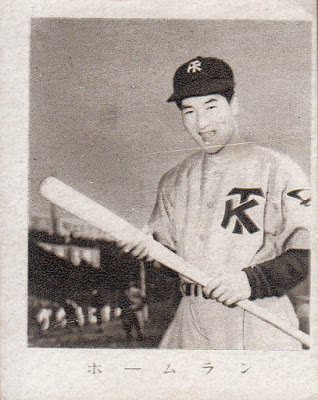 I had a kind of interesting time trying to figure out who this was and what set it came from.  I was a bit surprised that the seller on Ebay hadn't identified the player's last name at least since he usually does.  But he just had a "?" where he usually puts the name in his auction titles.  So all I really had to go on was that the player was wearing a Kokutetsu Swallows uniform from 1950-51.

After all these years I still can't read Japanese but I do a decent job pattern matching kanji so I looked at the names of the players on the roster for the Swallows from those two years rendered in kanji.  I didn't see anything that matched.

Puzzled, I started looking through Engel to see if I could identify the set.  Obviously all I knew was it was a bromide that was most likely from 1950 or 1951 although it could have been later.  I eventually came across something labeled as "JBR 87: 1950 Bromide Game".  Here's part of Engel's description for the set:


Each card has multiple versions. The regular cards have a player image within four off-white borders, with the player surname, position and team in parentheses, all in Japanese, printed from left to right within the bottom border. Ink used for the image and text can be black, brown, or green. Each regular player card also has associated game cards, which are identical to the regular card, except that the information in the bottom margin has the notation, “hit”, “double”, “triple” or “home run” in Japanese instead of the regular information.

A light went off in my head - could this be one of the "associated game cards"?  Instead of the player's name, was this text a baseball term?  I took a look at the Japanese Wikipedia page for "home run" and I'm pretty sure that that's what the text on the card says.  Engel went on in his set description to say that "the bearer of a card with the 'hit' notation was entitled to a 4th prize bromide.  If his card had 'double' printed on it, he received a 3rd prize bromide, etc., etc."  So this card could have been exchanged for a 1st prize bromide, which are not catalogued in Engel's guide so far.  I suspect it means that this card is pretty rare.

Once I figured out the set, the player was relatively easy.  Engel only lists one Swallows player - Masataka Tsuchiya - and his description of Tsuchiya's card is simply "holding bat".  Engel doesn't think he has a complete listing for this set so it's possible that this is another Swallows player but I'm going with Tsuchiya until proven otherwise.
Posted by NPB Card Guy at 6:47 PM

Cool card, and bit of detective work. It does indeed say "Home run"!

Thanks guys! I appreciate the confirmation on the text from both of you.