Card Of The Week December 1

Lots of interesting news stories in the past week regarding player comings and goings but probably the most interesting story is that former Hanshin Tiger, New York Met, San Francisco Giant and Hokkaido Nippon-Ham Fighter outfielder Tsuyoshi Shinjyo is going to try to make a comeback.  Shinjyo is 47 and last played for Nippon-Ham in 2006 before retiring.  He was still property of the Fighters but they have officially released him so he's now a free agent.

It will be interesting to see what happens.  I'm not sure I see him signing on with an NPB team but it wouldn't be out of the question for him to end up on one the indy league teams.  Tuffy Rhodes spent a season as a player-coach for the Toyama GRN Thunderbirds of the Baseball Challenge (BC) league in 2015 when he was around the same age as Shinjyo.  He hit .315 with 5 home runs in 44 games.  Julio Franco was player-manager of the Ishikawa Million Stars of the BC League in 2015 at age 56 and hit .312 in 77 at bats.  So it wouldn't be unprecedented for Shinjyo to play in the indy leagues.

Shinjyo of course spent three years playing in MLB for the Mets (2001), Giants (2002) and Mets again (2003).  But that wasn't the only time he played in the US.  He spent the 1996-97 off season in Hawaii playing for the Hilo Stars of the Hawaiian Winter League.  This league existed for five seasons in the 1990's (from the 1992-93 offseason until the 1997-98 offseason) and attracted players from MLB, NPB and KBO organizations.  The most famous alumni of the league is Ichiro Suzuki, who played for Hilo in the league's first season.  Despite what you might hear, the 1996-97 season is the ONLY season that there were baseball cards for the league (at least until its second incarnation in the mid to late 00's) and Shinjyo is featured in the Hilo Stars set: 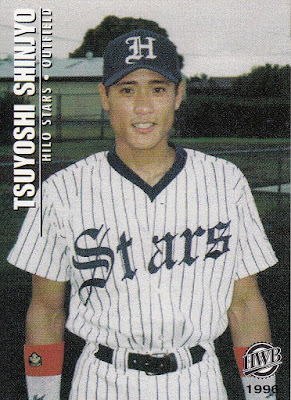 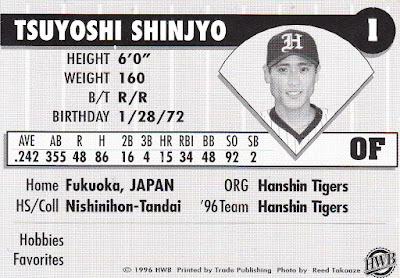